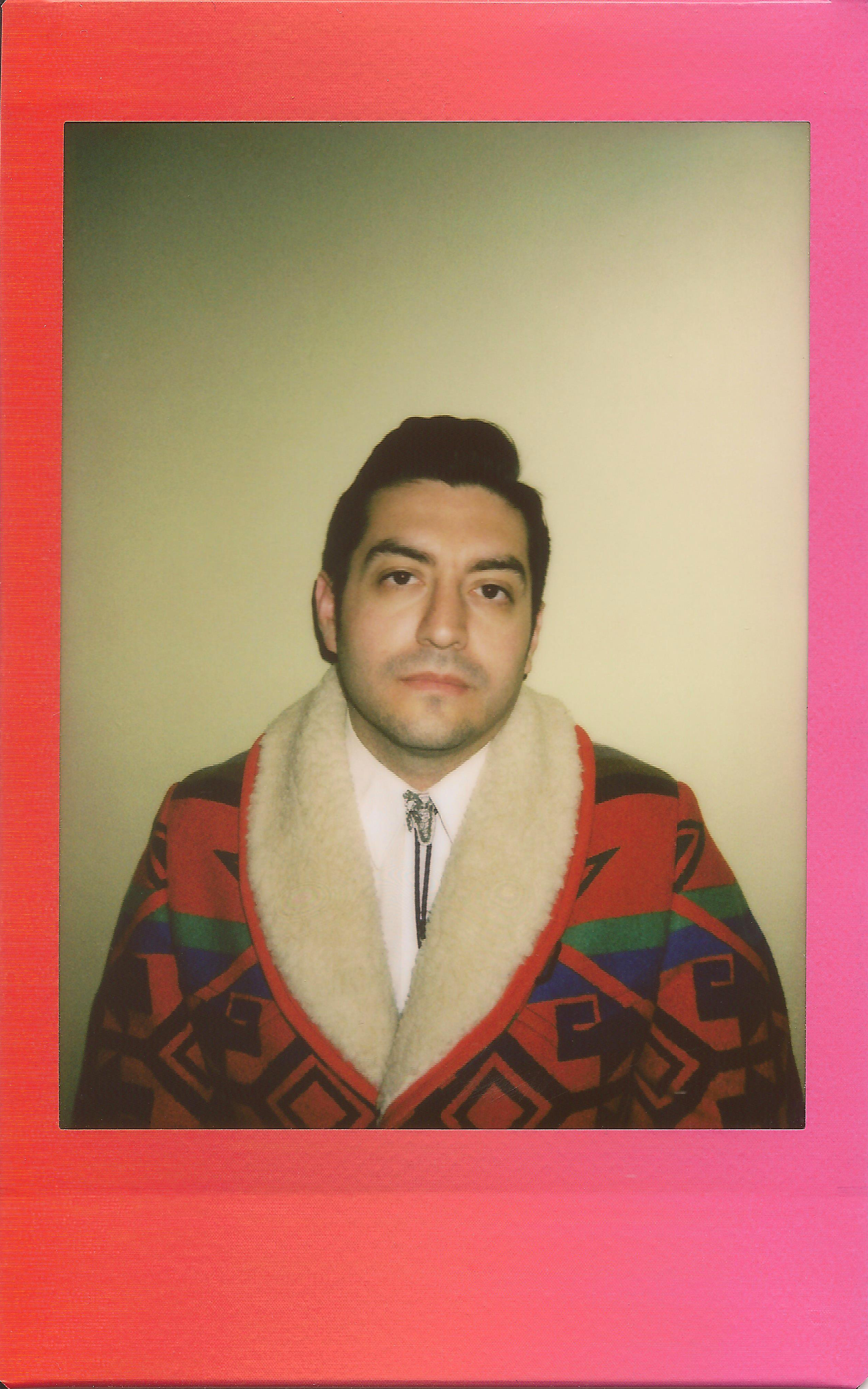 David Joez Villaverde has recently appeared in Yemassee, RHINO, The Indianapolis Review, and Gravel. He was a finalist for the Antioch-Frontier Fellowship and received a scholarship to attend the Bear River Writers’ Conference. Follow him on Twitter @AcademicJuggalo or his website schadenfreudeanslip.com

Black Warrior Review: What can you tell us about La Piedra de los Doce Angulos, the actual artifact?  What about this particular stone evoked a poem from you?

David Joez Villaverde: La Piedra de los Doce Ángulos is part of this fabulous wall on calle Hatunrumiyoc (street of the great stone) that probably once was the palace of Inka Roq’a. Like a great many things in Cuzco, this history is somewhat apocryphal, but what I do know is that it is a source of great national pride in Perú and perhaps the foremost example of Incan masonry. With 12 corners and 12 sides it sits perfectly flush with 11 other stones, seamlessly seated with no mortar, the cracks so thin you can’t slip even a piece of paper between them. It has stood in place for almost 700 years, surviving countless earthquakes and the Spanish reconstruction of Cuzco. The Archiepiscopal Palace was built atop of it, and this eventually became a religious art museum. From the street you can see the juxtaposition of the Incan, colonial, and republican periods of architecture all layered over each other in obvious metaphor. It was a news story from a few years ago that brought it back to my attention: a couple of Chilean tourists had defaced it with spray paint, and just hearing about that made me viscerally upset. When I reflected back on my anger, I saw myself as being attacked, and in this stone, a thing outside of time with all these weird irregular edges and a crazy idiosyncratic shape, I saw an identity which I had eschewed for most of my life. So an act of vandalism put this all in motion.

BWR: Part of what we admired about this piece was its ambition and sprawl.  Can you tell us a bit about the process of writing the long (dare I say, epic) poem?  How did you go about maintaining the energy?

DJV: I am not sure I have a really good answer or an enviable process, it was all pretty ad hoc and not very healthy. I started with a deadline. I had a rough sketch of an idea I’d wanted to work on for a couple of years and I gave myself two months to finish it for a competition. I was working full time in a restaurant so I stayed up a lot of late nights til 3 or 4 when the apartment was quiet to get the writing done. The output was slow in the first month. I was waiting for books from the library, just kinda pecking away at the first couple sections. I even spent a ton of money I didn’t have on an out of print journal with W.S. Merwin’s translations of Quechua and another book of Mark Strand’s—neither of which ended up being useful. I wasn’t getting a lot of sleep but there was a direct correlation between the energy I spent on the poem and the energy it gave me. As I put more of myself into it I got more out of it. It begin to spill over into everything I was doing, I’d write lines at work in the kitchen and just repeat them over and over in my head so that I wouldn’t forget them. And the energy just kind of kept building. I was lucky enough that I was able to finish the last portions of it while I was on vacation with my partner’s family just as the deadline arrived. I’ve always worked better with pressure, but I’m afraid this isn’t a very sustainable method of creation, and not one I would be a strong advocate for.

BWR: Both you and the piece are polyglots, and the first section explicitly draws the reader’s attention to the speaker’s choosing the colonial tongue selectively.  What was the art of weaving these languages together like during composition?

DJV: I think something you see a lot of in bilingual poetry is the use of a second language to exoticize the subject, which, to me, always felt cheap and exploitative. So I aped the familiarity of that style initially, to ease the reader into the poem, so that they could infer the meaning of a word by context or association if it wasn’t already a cognate. The poem starts kinda slow because I knew I was asking for a lot from readers already, and I really wanted them to be somewhat invested before I threw anything really challenging at them. But I was really conscious of this dirty little trick I gleaned from Pound and Eliot, which is that if you imbue a poem with multi-lingual depth and subtle allusion, certain readers will comb that for meaning and by the time they have gone through the labyrinth of your poetry to find the meaning, they will have invested so much time and energy that they almost have to believe the end result is brilliant. There’s an almost inherent bias among some of us that hard equals good, so much so that when we finally unlock the meaning of a piece it just confirms what we long suspected, even though in the case of Pound and Eliot the meaning of much of what they wrote was reactionary and fascist and awful. I wanted to use this approach, not to obfuscate horrifying prejudice, but to illuminate a powerful personal truth. But beyond these unctuous tricks, the real art was learning what each language uniquely communicates. Each language is not created equally, it speaks for the people that created it, how they see each other and the world. I tried to highlight the richness of each language for what it best expressed, culminating in the translations to the orison and then I tried to end on a synthesis that was more fluid and less disparate. This all probably sounds like a very clinical post mortem, but I actually didn’t really think about any of this stuff while I was writing because actually thinking consciously about these types of things completely and totally prevents me from being able to write. I don’t know if its opposite sides of the brain or something but the parts of me that were writing were mostly just listening for sounds or listening for what I needed to say. It’s hard to say what it was like during composition because it was mostly me listening to Raphael or Serrat over and over again in the wee hours of the morning and sometimes I was thinking in Spanish or English or Quechua.

BWR: How did you go about selecting a form for each section? We have a gorgeous contrapuntal, a calligram, a trinity of hymns, and a checklist— did these forms come intuitively?

DJV: One thing I struggled with while writing this was balancing the raw emotions that couldn’t be restrained by form with the precise emotions that require the subtlety, breath, and space that form provides. But I wasn’t really sure how to do this and just kept revisiting something Robert Hass said about form being the way a poem embodies the gesture of its making. I just tried to be present with each emotion long enough to understand how it wanted to be represented. So I am not really sure if I selected the forms as much as they selected themselves. For instance, the checklist section was born from the unique frustration that years of taking Scantron tests will give someone like me, where you are asked your racial / ethnic identity then given five little bubbles to fill in with a number two pencil. There is such absurdity in all the bureaucracy sustaining racial hierarchy, it being just an echo of the sistema de castas and this form encompassed that. So yes, I think all of the forms developed intuitively, but I also think saying something developed intuitively often belies the fact that a lot of hard work precedes the moment when the intuitive solution presents itself. Another example, originally the contrapuntal was something much sparser but I kept hearing the ever verdant advice of my editor, Ethan Milner, telling me to dig deeper, that there was more to say. And I expanded on it several times but it felt incomplete. I don’t know how many days I spent looking at a nearly blank screen before I realized my sin was a sin of omission, that my passing privilege was a blindfold as well as a hiding place. After that it was easy to intuit that what I needed was a bifurcated form to match. It sounds really dumb and obvious now, saying that out loud, but for me that space of pure intuition and creativity is what follows the spiritual work of self-understanding. And if you are anything like me, it seems really really hard most of the time.

BWR: What do you hope to say about loss and memory in the piece?

DJV: I suppose that nothing sought after is ever truly forgotten, anything that is lost can be found.

BWR: What are you up to now?  What are you working on, and what are you reading? Who are some other writers that you’re currently excited about and why?

DJV: I just attended the Bear River Writers’ Conference which was a dream come true. I think I’m going to start applying to MFA programs and try to make poetry my livelihood. Other than that, I got sober over 5 months ago and to be honest I have not really been working on much besides recovery. I’ve been moving slowly through Mary Karr’s The Liars’ Club, Field Work by Seamus Heaney, and The Book of The Sacred Magic of Abramelin the Mage translated by S.L. MacGregor Mathers. I’m really excited about Kendra DeColo because she works a couplet better than anyone I’ve ever read, Marty McConnell because I recently read a sestina of hers from like 2012 and it broke me with how good it was, Kelly R. Samuels because she does these soft pivots that are so imbued with grace and I often wish I could do that, Natalie Eilbert because she is just the best and everything she writes reminds me of how crude and unevolved I am, and Francine J. Harris because I always learn how to use language with more courage and power when I read her. I also just ordered Michael Wurster’s new book Even Then and Lima :: Limón by Natalie Scenters-Zapico, both of which were birthday presents to myself and I’m super stoked about them.

To read David’s work and more, pick up a copy of 45.2 or order a subscription from our online store.