Remembrance and Against Remembrance: Unforgetting Private Charles and Encountering History 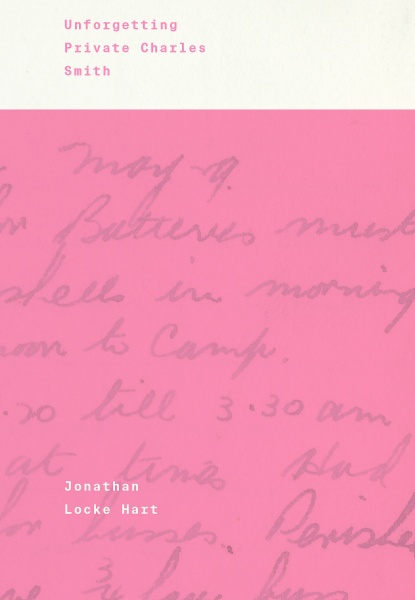 I was teaching a first-year composition class, themed on Image, History, and Digital Archive, this spring. What is an archive? None of my students had been to an archive before. On the fieldtrip to Hoole Special Collection at the University of Alabama, students gaped at the old badges, letters, dairies, and menus our librarian pulled out from the backroom and unwrapped with care. These physical artifacts present to us the past – not just the past, but the past that demands effort from the viewer. What do we make of the archived materials? How do we proceed from there to writing: an essay, or even a creative project? As I opened Unforgetting Private Charles Smith in early summer, I wished I had met this book earlier, as such a small book addresses the wonder, the surprise, the excitement, the confusion, the empathy, the question one could encounter in the archive researching and searching, and presents a beautiful poem brewed from the archeological journey.

Unforgetting Private Charles Smith is a solitary quest for a young man in history. The first half of the book is an essay, in which Hart traces his initial encounter with a small diary in the Baldwin Collection of Canadiana at the Toronto Ref­erence Library, his return to the archive and exploration of the personal life of the diary writer, Charles Smith, and the war. The second half is a long poem, transcribed by Hart from Smith’s diary. So here we have an unknown author and his “editor-in-chief”, a “poem” that was originally jotted down in the battle field as a diary and had no intention to be a poem, a written voucher by the “editor-in-chief” that records the journey of the discovery. A century after its birth, the “poem” is recognized, revisited, restored, refreshed, reborn. Together the essay and the poem present us a “farm to table” history that is treated with skill, care, and awe.

Who is Charles Smith and why him? Or what and who is Hart writing? In Hart’s words, “‘Charles Smith’ was no one and anyone: in its lack of concrete referent, his name was like all the other names I had seen on gravestones, cenotaphs, and other monuments to the dead.”(4) This is not a new statement, not is it spatially or temporally specific, but it is still striking to hear it. A soldier who did nothing exceptional and only survived just under a year after joining the war is probably rarely mentioned in history textbooks. Indeed, here we have a “poem without a hero” (Akhmatova). We know that from Hart’s essay. The expectation of a hero is rejected before we start with the first line of the poem. In this sense, Hart’s essay is like a private introduction to the historical imagination, which tells the last moments of a soldier that could be any soldier in any war. A retelling of a collective memory.

Now about the poem. Who’s the real author? Smith was simply writing down what happened, in telegraphic style. As part of Hart’s historical research, he decided to transcribe Smith’s diary. But what does “transcribe” mean here? To copy words from the old papers onto new sheets? To transplant ink and paper to digitalized codes? Or is the reproducing process itself a ritual? “…the very laboriousness of the process obliged me to focus my attention on the words I was copying.” (6) As Hart revisited the library later on, he continued this “ritual of remembrance” (6), and started to hear the rhythm and cadence in the text: “words imprint themselves on me, forming pat­terns, and a poem begins.”

Bonar Law inspected us. It rained

Nearly everybody had passes for London.

A good assortment of officers

Including some Hindus. I walked the streets

In evening, not crowded. Girls bold

It is hard to realize we are at war.

A Brigadier-General inspected us

And we showed him how we would take

A German trench. Digging till midnight

Just behind the monastery once under

Shell fire and now only a frame left.

The weather is good for digging.

We heard the cuckoo and the skylark.

About a hundred yards away. No one hit.

I heard nightingale. The trees were all out in bloom

It is hard to realize that a war is on,

On a quiet day.

The account is succinct, compact, candid, with repetitive themes on weather, surroundings, feeling and so forth. Hart does not abandon Smith’s voice. As a historian and poet, Hart avoids what the traditional historical narrative might do: accurately represent the story based on the discovery of the true story of “what happened” (Hayden White). What we hear is Smith’s own voice, “a man in the trenches asserting the individuality of his experience in the vastness and inhumanity of the war” (6). But it is also through Hart’s effort as a curator that we are allowed to be close to him in such manner. I’m thinking about If Not, Winter by Anne Carson. Are we hearing Sappho’s voice, or are we hearing a reconstructed Sappho by Carson? Same with Smith and Hart. Hart remembers and wants readers to remember Smith in an unconventional way. Such a poem is the footage of a collective memory.

In the digitalized age, archived historical documents and materials are getting more accessible. On the website of The National Archives of UK, it is not hard to find “Letters from World War One” under “Classroom resources”. Every letter has been transcribed, presented on the same page with the original scanned copy. I wonder what common readers like me or my students would do when we encounter those accounts. Many of us might marvel, but quickly move on to trivial daily matters and leave the archive behind. But for Hart and other writers and scholars, the perhaps accidental encounter invites itself to a more fruitful and inspiring conversation. It is about seeing, noticing, connecting and making. One example is Lily Briscoe’s Chinese Eyes: Bloomsbury, Modernism, and China by Patricia Laurence. Intrigued by the cache of Bloomsbury letters and papers at a Sotheby’s auction in London in 1991, Laurence traces the romance of Julian Bell, Virginia Woolf’s nephew, and Ling Shuhua, an established writer and painter then, and began her Odyssean study on Bloomsbury in UK and New Crescent Group in China. She learned Chinese, traveled to Wuhan where Julian used to teach and where he met Shuhua, visited various libraries and archives around the world. A real version of “Possession” (by A.S. Byatt). The book not only uses unpublished letters, diaries, historical documents, interviews, journalism, but also incorporates visual arts and literary study.  Both Lily Briscoe’s Chinese Eyes and Unforgetting Private Charles exemplify the nobility of seeing.

For readers who have don’t have much experience with archives, Unforgetting Private Charles Smith is a brief introduction to the journey of discovery, of seeing, of thinking, of questioning. For readers who have much experience with archives, the book is a respectful revisitation of their mindful journey. What is archived is what we read, what we see is no longer archived.