Review: Why Women Have Better Sex Under Socialism: And other Arguments for Economic Independence by Kristen R. Ghodsee 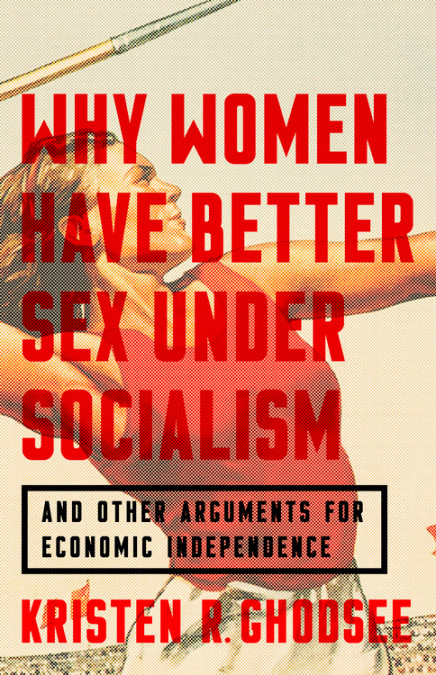 Why Women Have Better Sex Under Socialism: And other Arguments for Economic Independence

In recent years, enthusiasm for socialism and socialist-like polices has grown in America. Perhaps what has fanned this enthusiasm is what capitalism has caused. The byproducts of capitalism in America are the wealth gap, degradation of health care, the rise of the gig economy and stagnant wages (e.g. how many teachers have become, or are also, Uber drivers?), the rising cost for college tuition. The complaints of our current system are littered within the political sphere from prescription drug prices to the rise of people in poverty to the fleeing impossibility to save or build economic independence as an adult, or residual income and assets for later in life. What could fix these issues? If capitalism is making it harder to gain economic independence, can socialism fix it? Can socialism give people—particularly women—more economic independence?

Author of eight other books and Professor of Russian and East European studies, Kristen R. Ghodsee seems to think socialism is the answer. Her 2018 book Why Women Have Better Sex Under Socialism: And other Arguments for Economic Independence argues that America needs to borrow parts of the socialist system if those in power and voters care about women’s economic independence, and in caring for their economic independence, society would be caring for women’s lives on the whole. In the opening sentence she makes her book’s mission clear: “The argument of this book can be summed up succinctly: Unregulated capitalism is bad for women, and if we adopt some ideas from socialism, women will have better lives.” Ghodsee is also careful to say that we should adopt and borrow from socialism rather than emulate socialism from the 20th century. She does not advocate for a return to any form of twentieth-century state socialism.

This book is partly a history lesson of the two-hundred-year history of socialism, breathing in the contradictions and the bright, progressive areas that are often left out of the narrative of the socialism structures of the Soviet Union, Eastern Europe, and East Germany. Alongside these economic histories, Ghodsee also tracks the ebbs and flows of America’s capitalism. It’s the individuals and results, crashes and booms, of this history that Ghodsee draws on. She wishes for her readers to pick up the lessons from socialism’s past in hope that people might create something better in the current, capitalistic world in America.

To show how socialism—across time and place—has benefited women, Ghodsee uses many examples from this two-hundred history. The studies, individuals, historical context, information on populations of women under socialism are bits of hope. I found it invigorating to learn about the activism and progressiveness of women who lived under socialism. Women such the 19th-century “French utopian socialist,” Flora Tristan who in the 1830s and 1840s equated socialism and feminism as two dependent-on-each-other movements. I found it surprising and exhausting that back in 1897 Lily Braun had first proposed state-funded “maturity insurance” as there so many working mothers today in 2019 America who could use “maturity insurance.”  Coming across women politicians, WWII female fighter pilots and 1960s female astronauts, 20th century labor organizers who lived under socialism painted another picture of socialism for me: even if for just a few decades or moments in history, women often had economic independence and thrived, and had a higher chance to have a good life compared to the chances of their capitalism contemporaries.

I found myself keeping a list of what policies and actions create women’s economic independence: policies for public employment, high quality and subsidized childcare, parental leaves, mandatory quotas across all leadership, the ability to divorce easily, safe access to birth control and abortion, health care, reduced cost of college tuition. If nothing else, this book gave me—and will give its readers—more rhetorical and historical examples for why socialism is positive. The book also packs firepower and strength to advocate, campaign, agitate, resist, and create.

As the title claims, the book also has a two-part set of chapters dedicated to sex and how political, economic, and cultural ecosystems of capitalism and socialism can affect interpersonal and sex life. In a perfect study for this subject, Ghodsee takes us through the research and sex lives of women on both sides of the Berlin Wall—between the capitalistic west and socialist east. The differences are striking. In addition, Ghodsee informs us about how certain socialist countries promoted the idea that sexuality wasn’t related to economic exchange. Ghodsee writes of these promotions:

“…in the case of East Germany and Czechoslovakia, politicians and doctors openly claimed that this made relationships more ‘authentic’ and ‘honest’ than in the West. In countries like Poland and Bulgaria, medical experts supported the idea that women’s sexual pleasure was important for healthy relationship and disseminated public educational materials….to educate men about the basics of female anatomy. (Compare this to the United States, where even today many young people still don’t get adequate education on how to avoid pregnancy, let alone information about the intricacies of female pleasure.)”

Reading books like this that include large swaths of statistics, centuries and decades of study, information from individuals long past dead, make me think of all the women who’ve been affected by capitalism in a negative way. Women affected by capitalism’s ability to transform any (and every) moment of the human experience into a commodity and taking parts of the human experience such as motherhood, professional pursuits, and voting rights, and shrinking those experiences, limiting choices and abilities. This affect can be nuanced and/or dramatic, and everything in-between. I found myself wanting more stories from capitalism’s effect on women, especially here in states. This book left me wanting to know even more research. I wanted more stories outside of Ghodsee’s personal anecdotes and life as a college professor (not to discredit those experiences—they are valid and powerful). I wanted more specificity and local. For instance, I wanted to know about women in rural areas, in suburbs, retired women, single mothers, women of color. Wanting more from a book—especially a political and history book is always a good thing. Why Women Have Better Sex Under Socialism is a loud reminder that we—and women most importantly—aren’t commodities but human beings.