Review: The Life of Plants: A Metaphysics of Mixture by Emanuele Coccia 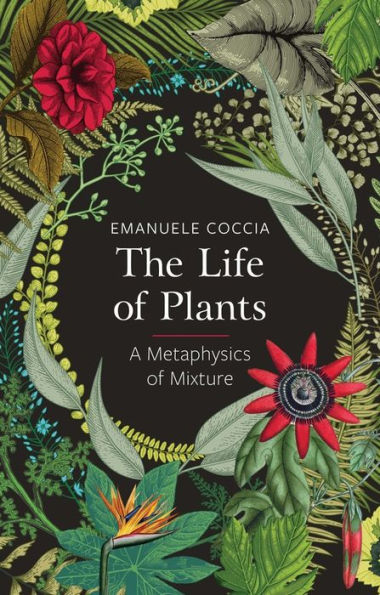 The Life of Plants: A Metaphysics of Mixture

It is May in Alabama, and the ground is opening up. Just today, the first of the okra sprouted in the backyard. Last week came the cucumbers, and before them the arugula, mesclun, mustards. Some of the perennials are already blooming: the yarrow, the black-eyed Susans, “the paradigmatic form[s] of existence of reason.” Unfamiliar of that last varietal? Well hold onto your sun hat – such are the proofs that punctuate Emanuele Coccia’s (very seasonal) The Life of Plants: A Metaphysics of Mixture. Coccia’s prior writing has heretofore tackled image, advertising, aesthetics. This newest venture into the botanical is grounded by the philosopher’s teenage years spent contemplating plants “in an agricultural high school in a small isolated town in the farmland of central Italy.” While The Life of Plants does not teach us what grew in central Italy of Coccia’s youth (a gardener can dream), his book’s ambitions are larger than any one bioregion. They are, in fact, so large as to approach the author’s very own Theory of Everything: “every truth is connected to every other truth, in the same way in which every thing is connected to every other thing.” But Coccia builds to this climax. He starts small. Small, that is, as a seed.

“To exist, the plant has to merge with the world, and it cannot do so other than in the form of a seed: the space in which the act of reason coexists with the becoming of matter.” One can overlook Coccia’s implication that all plants come from seeds and still appreciate the gist of his assertion: “Reason is a seed… Reason is what allows an image to become destiny, a space of total life, a spatiotemporal horizon.” It’s a tidier argument than, say, “reason is a seed, or a spore.” But this is not the author’s only distracting generalization. In claiming that plants “have no need for the mediation of other beings in order to survive,” Coccia too simply interprets producers’ position on the food chain poster that hung in your junior high biology classroom. Overlooked are the microbiota of soils and root systems that facilitate necessary nutrient uptake (for vascular, soil-dwelling plants, anyway). More importantly, Coccia misses the chance to strengthen the chorus toward which he writes: “fluidity,” “interpenetration,” or, that resounding “way in which every thing is connected to every other thing.” As exemplars of coexistence, plants rely on other organisms with which – and in which – they are immersed.

Less problematic are statements that oversimplify with little discernable payout. “Plants do not run, they cannot fly; they are not capable of privileging a specific place in relation to the rest of space, they have to remain where they are.” “Run” may be subjective, though a southerner could think of worse verbs to describe how cat’s claw spreads. Ditto hyacinth. This is to say nothing of the “flight” of maple seeds in a breeze, or the pivoting of heliotropic tulips to “privilege” the sunniest angle by the hour. These examples do not derail Coccia’s logic, but they belie a frailty in its execution. Which brings us to his next claim:

“…it is completely normal for someone who calls him- or herself a philosopher to know the most insignificant events of his or her nation’s historical past, all the while ignoring the names, lives, or histories of the animal and vegetal species that provide her daily nourishment.”

We’re primed for Coccia to answer his own challenge, prove he’s no such self-ascribed philosopher. And yet, not a solitary name of a vegetal species follows.  A lay readership – or a horticultural one – could benefit from the occasional context of a specific plant. Even a phylum. As things stand, all plants – insofar as Coccia is concerned – are presumed vascular and flowering until even those distinctions are clarified in the book’s waning pages.

But before The Life of Plants is relegated to the compost, let me pause. Coccia is not delivering a botanical treatise. Nor is he writing  – though I think he could benefit from the form – a Michael Pollan-esque reimagining of human-plant natural histories. This is not the author’s aim. The Life of Plants isn’t really about plants. Such a paradox becomes apparent when Coccia suggests “the paradigm of any living being” is – any guesses? The redwood? The rose? None of the above. “The fish.”

And so we swim towards “Everything is in Everything,” by way of immersion.

“… if being in the world is immersion, then thinking and acting, working and breathing, moving, creating, feeling would be inseparable, because an immersed being has a relationship with the world that is not modeled on the relationship that a subject has with an object but on that of a jellyfish with the sea, which allows it to be what it is. There is no material distinction between us and the rest of the world.”

“Move like a jellyfish
Rhythm is nothing
You go with the flow
You don’t stop.”

Bear with me here: I believe it is possible that Coccia ultimately intends The Life of Plants not to be read as an expository text but as an immersive one. That is, we are not called to reify “the relationship that a subject has with an object” (“reason” with “a seed”) or even, necessarily, phylogenic distinctions between plants (though I maintain greater specificity would enhance Coccia’s project). Rather, we are to read as an immersive act – one of fully being in the world – in which “thinking and acting, working and breathing, moving, creating, feeling” bleed into one another.

Plants serve as the focal point to impel Coccia’s mindfulness. He offers up the text as the same for the reader. At its most successful, The Life of Plants slips into what sounds like a guided meditation:

“Imagine that, for each movement of your body, there is another one that goes the opposite way; imagine that your arms, your mouth, your eyes have an antithetical correspondent in a matter that mirrors perfectly the one that defines the texture of your world: you would then have an idea, albeit a vague one, of what it means to have roots.”

Coccia seems to fully embrace the text’s potential in his final chapter. “Reason is a flower” becomes a mantra, intoned to start successive paragraphs. Tempted as we are to do so, I’m not sure Coccia intends us to unpack the syllogistic consequences of the earlier claim, “Reason is a seed.” Move with his argument, rather than miring yourself in the hindsight of apparent contradictions. You go with the flow, you don’t stop.

Even in the momentum of fluidity flowing, there are uncomfortable hiccups. For instance, Coccia suggests his “cosmology of mixture is founded on a different ontology from the one traditionally taught.” The ontology of whose tradition, exactly? Western philosophy?

I’m currently reading Robin Wall Kimmerer’s Braiding Sweetgrass: Indigenous Wisdom, Scientific Knowledge, and the Teachings of Plants which seeks to integrate schools of thought that have been held at arm’s length. Perhaps the synthesis Dr. Kimmerer achieves (through anecdote and evidence) is itself not “traditionally taught,” but Coccia neglects mentioning any cultural framework that espouses unification modeled by plants.  Likewise, for all the mileage Coccia attains with rhetorical “breath,” (“In the immanence of breath, the world appears to be something closer and extremely different from what we imagined,” “…to be in the world means always to share not only an identity, but the same breath,” “…any body is defined by its breath…”) he does not mention the Sanskrit prana, “breath” or “life force,” foundational as a yogic discipline. Without acknowledging any forebearer in unified, immersive thinking, any model in which breath represents such unification, Coccia’s arguments carry the residue of ego. And nothing stands in starker contrast to unification than the fortifying of the self.

Early on, Coccia delivers a tight preamble with hints of what will grow into his greater claim: “In making possible the world of which they are both part and content, plants destroy the topological hierarchy that seems to reign over our cosmos.” This tantalizing suggestion (down with up and down!) comes amidst incongruous terms. Coccia, or his translator, still opts for the familiar “higher life,” “higher plants,” “higher animal life.” When crafting a new paradigm, these details matter. So much for toppling the topological hierarchy.

Coccia’s tone – so often celebratory – and grasp of his subject come into their most resonant accord when he finally lands upon his own discipline.

“Philosophical ideas and concepts are not specific kinds of knowledge superimposed on other forms of knowledge or ideas, but a sort of movement… a certain climate, an unstable yet powerful configuration of current knowledge – just as the wind, the clouds, and the rain are… the manifestation of their power and influence on us.”

Philosophy is championed as the field through which all things can be held in motion with one another: “even things that do not and will never exist… can and must become an object of philosophical inquiry.”  It is a tender love song whose earnestness is felt, and – as the reason of love songs (or flowers?) go – a feeling might as well be real. I love it when Coccia reveres the roots of his own academic tradition: “For a long time, the sovereign gesture – par excellence – of the learned person was to bring together in him- or herself the most disparate forms of knowledge and to measure their unity in the breath of his or her awareness…” We see the secret of Coccia’s heart laid bare – and what an aim for a heart! To unify seeds and flowers, jellyfish and philosophical forebears into a mixture that metonymizes everything. Of course we will fail in such an ecumenical attempt, but does that mean we should not try? In a final charge, Coccia seems to open the door to many more such efforts, suggesting his approach is not singly capable. Rather, the only effective pursuit  “…is an extremely intense love for knowledge, a wild, brute, indocile passion for knowledge in all its forms and all its subjects.”

Now that’s a spirit with which I’ll sit at the table, share a blessing, and pass the okra.