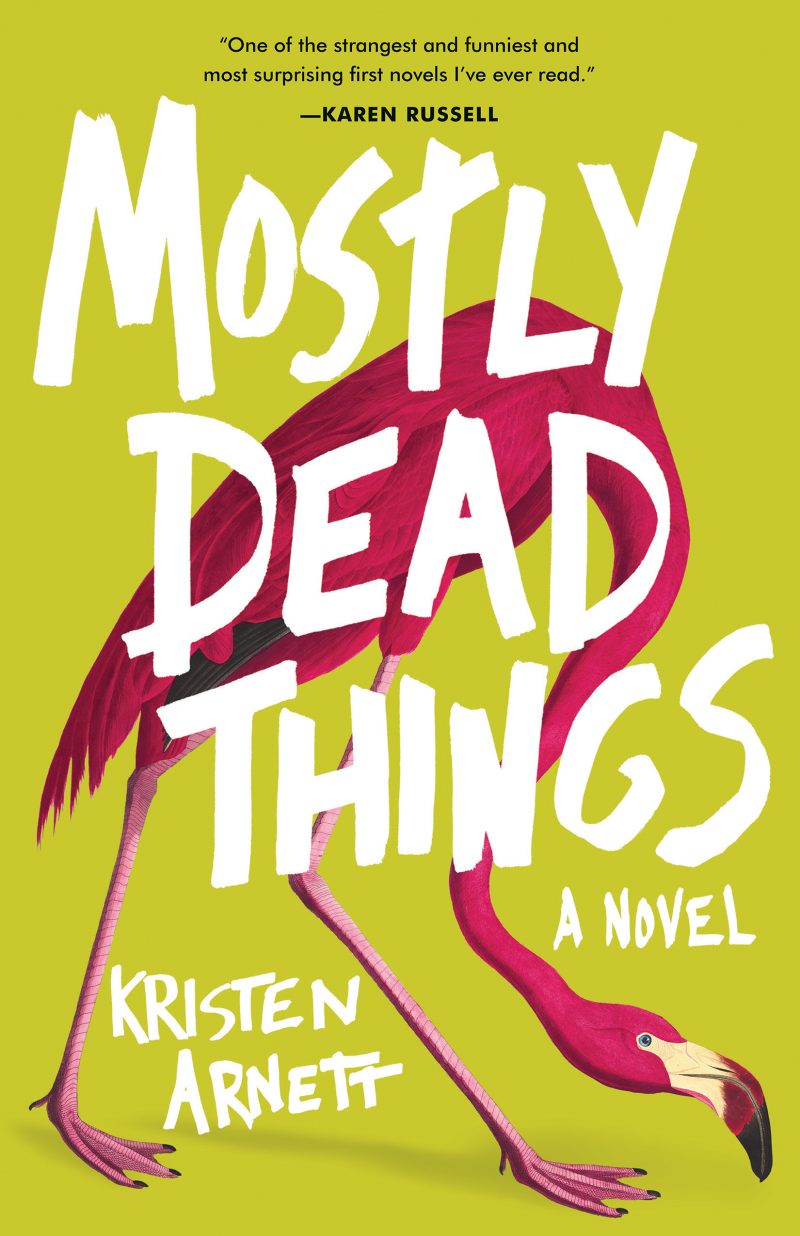 Kristen Arnett, self-proclaimed “lesbian willie nelson” and “7-11 scholar™”, is Florida’s ideal literary ambassador. She’s never not writing about the state’s land-locked, lake-marked heart, Orlando, where happiness is manufactured and unhappiness waits under the surface. Sometimes she writes the funny and sad together (e.g. her fiction), and other times she keeps them self-consciously separated (compare her essential essay on place “The Problem With Writing About Florida” with her tweeted musings on the possibilities of ravioli). Truthfully, Arnett is more than Just A Writer™—she is a real-time chronicler of Florida’s absurdities, an authority on all things library, a beer-bombing meme machine, and a consummate literary citizen. Like Florida itself, Arnett contains multitudes, and all of her personalities are on display in her debut novel, the poignantly grim and frequently hilarious Mostly Dead Things.

Narrator and “lifelong control freak” Jessa-Lynn Morton lives in Central Florida, where she and her father run the family taxidermy business. Despite her efforts to control her life, she’s had to deal with “an endless series of unwanted surprises.” One of those surprises is old but still-painful news: her lover—and her brother’s wife—ran off for “someplace even hotter than Florida with a stranger she’d met at the dry cleaner.” Neither Jessa nor Milo have been the same since—but good luck getting either of them to talk about it. Then there is this devastating development in the book’s opening pages: Jessa’s father kills himself in their shop. Jessa’s mother, Libby, is “set loose” after the suicide, and she begins constructing elaborate, garish art pieces incorporating the shop’s display animals and various sex toys. “Badgers fondling rabbits, a pink flamingo ducking its slender neck to fellate a squirrel,” and increasingly outlandish creations land Libby her own gallery show. Jessa can’t stand the implications of her mother’s internal life expressed this way: “The work was good. The fact that it was my mother creating it was what turned me off.” She can’t separate the quiet figure who lived in the shadow of Jessa’s father with this new woman who paints her own head and makes goats fuck bears.

We all have internal lives removed from the experiences of those around us, and Arnett is interested in what happens when abrupt, even tragic, change brings them to the surface. She cuts into relationships and presents their messily complicated insides. She analyzes love and its “steady burn of acid indigestion.” (Self-inflicted indigestion is the best kind: of course Jessa starts sleeping with the woman providing Libby the gallery space for her horror-show sex-art.) She complicates the role of family—Jessa’s battle to keep the shop afloat moves her to hire her niece and nephew who have, shall we say, unconventional ideas for bringing in new business. And in broader strokes, we see change characterized by Florida itself:

“[This] was what Central Floridians did: pave over everything so they could forget what had been there before. Theme parks and chain restaurants were built over homes and libraries. Banks took the place of family-owned businesses. There were highways built over historic areas; places where you wouldn’t know something had ever happened unless someone told you or you read about it in a book. The park where the Seminole once lived had been razed to build a carnival space, which in turn had been repurposed as a power building that eventually became a Publix. No one ever seemed to remember what came before. A kind of local amnesia, my father called it.”

The irony here is that Jessa is incapable of metaphorically paving over her own life. She can’t bring herself to move on from her past, to seal her wounds with concrete or something less caustic (beer doesn’t count). She just doesn’t know how to do it, especially with the past “staring you in the face all the time … its teeth dug into you like a wild animal.”

But there is a radical honesty to Jessa’s mind. She knows that even though “nothing in [her] life ever felt like it was moving fast enough,” she is still the kind of person who “[can’t] stand to leave” her home, despite the “sameness, the dullness of everything” around her. Jessa is too connected to the past—and the people occupying it, i.e. Brynn and her father—to move on, even though she needs to. Perhaps this is why her mother’s out-of-character outburst of pornographic sculpture is so startling: Libby moves on immediately. Jessa can’t understand how someone could start to fill the hole in their heart so quickly.

When Jessa says that “home and safety [aren’t] synonymous” concepts for her, you understand where she’s coming from. She works a physically demanding job cutting animals open with a surgeon’s precision, and when that work is slow, she scrapes roadkill from highways. Her lover abandoned her. Her father killed himself. She lives in Florida for god’s sake, and while I always find myself defending the state from the eyebrow raisers in the rest of the country, well, I mean, the roaches down here are as big as small birds and as capable of flying, and yes, alligators will eat you. So when Jessa says that “love makes you an open wound, susceptible to infection,” well, you understand why she closes herself off and chooses to reside, so to speak, in the past.

Jessa’s interiority gives the book its structure. Mostly Dead Things is loose with time, juxtaposing memories both delightful and difficult from her sun-stroked adolescence with the present-day aftermath of her father’s death. This structure is one of the book’s strongest points, particularly when considering capital-C Character. Jessa’s memories show the reader that her father and Brynn are utterly normal (and flawed, petty, and multi-dimensional) people. We understand that, even if Jessa has trouble recognizing it in the present. Jessa’s memories comprise about half the novel, and though they function as pauses in the “main” narrative, their placement reflects a Floridian’s natural sense of pacing. Arnett moves us through the story the way one would walk through a summer day in Central Florida, where “the humidity [is] so thick it almost hurt[s] to breathe”—gradually, breath held. They function as one would expect memories to, that is, as images erupting in the mind.

Jessa’s memories largely represent absence, which Arnett approaches the way you would a hollow in the yard: cautiously appraising it to determine if it’s just a low point or, in fact, a sinkhole. Sometimes Jessa’s thinking circles a spot too many times—Arnett has a tendency to return Jessa to thoughts already thought, insights already seen, anxieties already plumbed. Yet this is the way of memory, is it not? This is the way of rumination and distraction, even obsession: returning to the same points, again and again. If, at times, these moments are repetitive, they are fitting in their own way as representations of Central Florida’s landlocked waves of unrelenting heat. Like love, or heartbreak, the heat will scramble your thoughts into runny eggs.

I’ve mostly talked about The Sad And Difficult Stuff in this book—there’s a lot of it! But, because this is Kristen Arnett, it’s balanced with plenty of strange, even whimsical ephemera. We get peacocks, multiple love triangles, viking funerals, insurance fraud, beer chugged like water, the aforementioned stuffed animals fucking each other, and, yes, alligators. The banter between Jessa and Milo is fantastic stuff—they hurl insults at each other like ball-busting old pros, which, like all siblings, they are. There is real energy and humor on almost every page, even if many of the pages are marked by tragedy or heartbreak. Sex, here, is both joyfully queer and viscerally sad. Animals are treated with reverence and (quite literally) given heart attacks. Family is beloved and bereaved. Arnett gives us everything—heart and ache.

Where does Kristen Arnett go from here? Everywhere, I hope—I mean it as the highest compliment that Mostly Dead Things would make a hell of a splash on #PrestigeTV. It’s a good book, and if current coverage, buzz, and reviews (including arguably the ravest rave the NYT’s Parul Sehgal has ever written) are any indication, it will be the indie book of the summer, a designation it deserves. I’m optimistic—maybe it’s because Florida and its people are near and dear to my heart (and there’s nothing like rooting for the home team), but I can’t help but think that Arnett is the next figure of national prominence in a recent line of important writers who call or have called the state home. Spend some time with her words and you’ll see what I mean.