Review: IN THE TREE WHERE THE DOUBLE SEX SLEEPS by Rob Schlegel 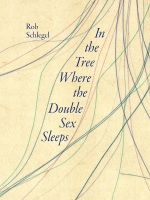 In the Tree Where the Double Sex Sleeps

Rob Schlegel’s In the Tree Where the Double Sex Sleeps is a collection of poems that blurs tenderly any sense of certainty with its lyrical attention to the fluidity of selfhood. Schlegel’s poetic voice channels his unique synthesis of visions and voices to consciously deliver language that almost forcefully erupts when dream sequences yield an awakened sense of fluidity in identity. The voice we hear is one, but the subjectivity is beyond singular. Schlegel’s lyrical presence sounds collective in each selection. His voice resonates in parallel voices embodying miscellany, sometimes speaking at once quite loudly and at other times at a relative whisper within the lines of the same poem. Throughout the work, hazy, momentary flashes of firm identity blend with stark realizations of ambiguity that not only bend the light and blur the edges of selfhood but also concretize the impossibility of the boundaries the speakers construct for themselves in both the private and public. In weaving together images and sound, Schlegel crafts an identity unbound from constructions rooted in time yet unsettled with thoughts about what freedom within such territory means.

The ineffability of Schlegel’s images liberates us from our positions of temporality. One such emancipating image, the “[h]undreds of barely visible spinnerets / drift[ing] through the air” of Clamor the Bells Falling Bells (3.5), communicates a sense of profusion and anonymousness, the pouring forth of an indiscriminate abundance of lives without context or aim. Such an image of suspension illustrates that any real sense of temporality is only dangled as illusory. The image of the spinnerets causes us to examine the tensions that exist outside of time.

Themselves moveable, segmented, various, and reliant on tension, spinnerets in image acquaint us with the understanding that remnants of ourselves may at times be both retained and lost as the silk of our lives is woven into fabrics of identity, textiles that clothe unconventionally in spaces most at one’s core, as Schlegel’s work confesses and renews. The repetition of this image in part five of the poem communicates the profundity of a journey through idiosyncratic circumstances toward originality:

Every fall, baby spiders climb to a high point,

position their abdomen to the sky

until the slightest breeze carries them away.

The spiders travel a few feet, or a thousand miles.

The migration is called

The image here binds us to notions of uncertainty and the unpredictability of identity apart from the originary source of our existence, revealing as it does the floating toward ipseity. The image imparts not only the tension operating through expansiveness but also those notions that accompany finality. Schlegel uses the image to illustrate that identity is an immense journey without certitude, and only the certainty of death prohibits exploration.

This collection performs the reaching for and arrival at the point of understanding where layered constructs of selfhood are unfolding. The lyrical subject peels back, tosses away, and reimagines the nakedness of a mind that has been weighted down by normatives and constructs to unburden what exists beneath the weight of such encumbrances, proclaiming the death of sometimes-expected ways of being toward those which almost never were but always really are at the core of existence.

To reveal the unprotected, stripped complexities of impulse and identity, Schlegel challenges the maternal, the paternal, and all spaces in between and beyond such positions to remake these roles in ways that resist fidelity to oppressive compromises. In Threat Perception, in particular, Schlegel confronts the complexities of private relationships and these relationships in public spaces once revised roles are performed anew. In part one, the subjective voice hints at a halted sense of expression, as Schlegel puts forth another ineffable image. Limited to a “face performing language the children freeze” (1.1), a parental voice admits a lack of freedom in sounding out what might be on the tip-of-the-tongue, opting instead for physical touch and an admission of frustration in what can be said and to whom it might be said. Through the lines, “a softer he” (1.12) confronts an inability to share anything of real value to “Kisha” (1.9), a valued other in the speaker’s life, and we see what might be lacking in their shared private relationship where roles have been renovated. The speaker expresses difficulty adapting and understanding  due to what seems a sense of guilt but also appears more unbound. In part two, the poem offers a glimpse of what everyday participation might be like for our unburdened speaker, as duties of fatherhood move from the realm of the mundane to a more sensual inwardness that reorients our own expectations:

Safeway’s a total bust. They sell the deadest meat.

I end up spending way too much

Lindy’s down the aisle, calling for me.

Poppy, are you hiding? Greens wilt into greens

misters crisp to fresh. What fiction.

Fingers in mint I mistake for rosemary.

What aisle is this? Forecast calls for blow—

someone else’s turn to care; that dad melting brie

in the marvelous glitter of his mouth.

Schlegel’s attention to fantasy in the last few lines here, “that dad melting brie / in the marvelous glitter of his mouth,” arrives through the tensions of what’s commonplace in this image, as a visit to the supermarket produces profound meditations about what’s hidden, what’s counterfeit, what’s pretense, what’s known, and what’s desirable. The closing image drives home the tensions between public and private self Schlegel makes so evident in many of the poems.

Schlegel’s attention to form also draws us beyond fixed notions. From the excerpts previously included and the one that follows, we see that the fragmentary constructions, numbered sections, unexpected stanza breaks, and lines of irregular lengths group in ways that disunite the images while holding them together for juxtaposition and possibility, relating the indivisibility of ideas and the magnitude of their impact. The sonic import of the lines can be felt in the mouth. Read aloud the selection included below, taken also from Threat Perception, to feel the way it not only attempts to make excuses for the disruption of constructed normatives but also reveals the similarities shared between Wil and the lyrical subject. The breaks between stanzas one and two and the enjambments near the end of the poem in the last few lines force the feeling of layered subjectivities, at once pliable and uncompromising. “I want to say” hangs in suspension (6.9) as though itself a strand of spider silk, the white space representing Wil’s identity possibilities and his ballooning away from the speaker’s language of certainties. Wil catches his own wind.

Wil and I paint our fingernails.

I know a Nietzsche scholar

who also paints his nails, I say.

as if warning, Don’t realize me,

Let us treat each other well

as if we are real; perhaps we are

I want to say

even as I fear for him, that all his life

into the flames of a singular rage.