“It is clear,” replied Don Quixote, “that you are not experienced in adventures. Those are giants, and if you are afraid, turn aside and pray whilst I enter into fierce and unequal combat with them.”

[On Solaris, a crew member tapes paper over an air vent to remember the sound of rustling leaves.

This is a performance for people moving through a space, wearing sonorous suits of discarded materials. Human windchimes are nature sprites, of a nature that includes what we usually overlook and discard. Trash, in reconstituted form, returns to haunt its past homes. The feeling is of an alien world overlaying the everyday environment. (See YouTube video, [off-ice figure skating] miki ando’s carmen.[1]) This world is composed of mundane objects, but maintains a separate sensibility and internal discipline. Human windchimes neither avoid public contact, nor court an audience reaction like a ball team mascot. They are on an epic journey to seek out the sounding potential of the space they are in. Their movements respond to particularities of the space they traverse. They inhabit the space and resonate its hidden music – conversing with, but not bound by, its everyday use. 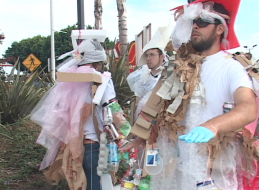 The signature pacing is that of an indifferent sloth. The simultaneity of different tempi is one manifestation of separate internal authority. (See Three-toed sloth road escort[1]). Maintain spaciousness – time to listen and react. Intense action may be balanced by durations of stillness.

Movement unites with sound. Chime materials include both hand-held chains of cans and bottles, and garment-affixed embellishments. Wind chime suits must be sufficiently adorned to communicate the fullness and otherness of their world. Aim for maximal fluffiness and sonorousness. Volumize. Suits should appear not as shirts with a few scraps attached, but as genuine mounds and heaps of trash, with enough coverage to mask person-ness. No sad Charlie Brown Christmas trees.

Each performance of Human windchimes has been tailored to its particular environment – whether loft, library, city street, office building, or art museum. Performances have included more installation-like periods of chimes freely interacting with passersby or environment, as well as more focused choreographed sequences. Durations have ranged from 15 minutes to hours in length. Each performance location is first assessed for its inherent patterns of social interaction or non-interaction, as well as geographic and architectural features, and plant or animal life. Windchime movements are devised and sequenced in response. 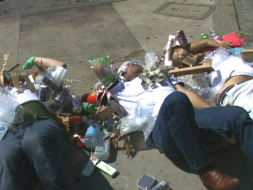 These are arranged for a general location given increasing numbers of chimes, and then for given architectural or geographical features. 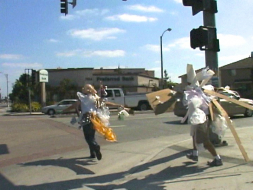 Bird run
(arms spread out wide) run, run, run, run, stop (arms down) to human statues. Caravan as a line of runners. Good for crosswalks. At rest, sudden flap in reaction to a sound of the environment.

Furious penguin
Elbows in, hands out, fingers together, flap as fast as possible keeping torso straight – may be accompanied by shuffling, flock cuing – short burst stops all other activity, restart all together in ensemble.

Fallen turtle
Supine, four raised bent limbs pedal and paw the air. Gather in a group to fall together in sequence or unison. Pedal together. 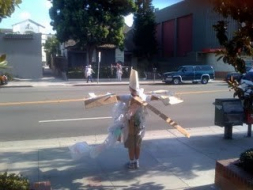 Antiphonies
At a distance, imitation or call and response or argument – sometimes immediate, sometimes leaving space to listen, contemplate, reflect.

Tango
Forward/backward tango walk in tandem at a distance

Telephone
Single action mimicked in sequence, or cued by sound.

Around a corner
Shuffle along with backs to the wall, spy to spy – perpendicular dialogue without seeing.

Abelard and Heloise
Conversation from opposite sides of a wall, or alternate landings of a staircase – never meeting by sight, but conversing in sound. 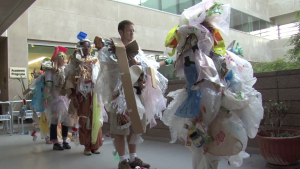 Tempo shifts
Given a repeating floor pattern, each stationed at a vertex, slow-ski/run in parallel – ||: slow slow slow slow – run! :||

Rotisserie
Assemble slowly one by one, slowly rotating individually at rate slower than rotisserie chickens until field is full. Then abruptly snap to align facing one way. Hold. Snap to rotate. Hold. Snap, hold. Continue through full rotation. Scatter.

Fan
Fanner proceeds along line or still arrangement, fanning other chimes with accordioned-paper fan or motorized fan depending on availability. Fanned chimes shake, arms out. Fanner might trade places with a chime at end of the line in the manner of Jane-Austen-movie-type line dancing. Or fanned chimes blow away, limbs out, slomo drifting/floating/falling into a new arrangement of statues. 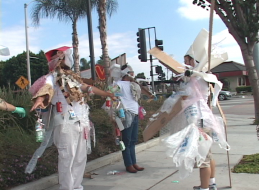 Take in art as fishes in water
Mouths open wide, head tilt back before picture – fish-breathing art as manna

Running from paintings as bullets
Statue/sloth-like skiing in spaces between pictures.  Duck and run at a painting.

Before a painting
Lie on ground very still, very long, as in coffin. Rectilinear group arrangement – at intervals, activate snow angels as Morse code – movement coordinated by sound, not sight, at a distance – flipping over possible.

The Craft of the Old Masters
Use paintings (portraits, figurative assemblages/classically composed arrangements of people) as models for tableau vivant – model the same poses for a serious amount of time.

Michelangelo
Hold still as human statues in the form of classical sculptures.  Run to another station, new statues.

Boundary crossing
Stand at a corner – of floor pattern, wall, column, plinth, hallway. Upon visitor passage, run to another corner. 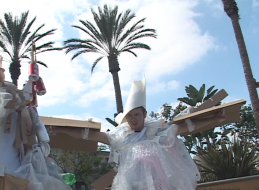 Columns, trees, or other verticalities

Spy v. spy
Hide from others against column. Camouflaging into column as totally still (arms down or up in manner of Grecian column support), or casually leaning against column. Hold for a while. Run to another. Ideal with two chimes hiding from one another.

Signage
For a few:  one by one in small-bird-steps, walk a path on the ground tracing out the forms of the letters of the words, below them on the ground. Arms up in arrangement of choice when on the path of the letter, arms down in between.

Weather vanes/Gorillas in the mist
Camouflaged amongst foliage, arms out, allowing flutter – fermatas 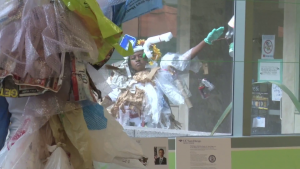 Through the looking glass
Across a window or other boundary, mirror another chime.

Confused birds
Fly at glass. A few make it through. From the other side, they fly at their brethren in imperfect symmetry.

Shuffle through, if possible in same compartment as other visitors. One continues revolving inside for a very long time. Alternately, stand to the side of the door, arms out, revolving in dialogue with doors. Small, dainty steps – sugarplum fairies.

Spot
Only stand still on marked spots. The rest is quicksand, run fast over, bird arms out. 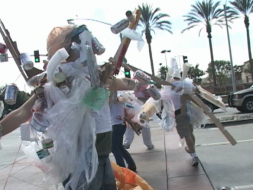 Progress in close proximity to railing, sliding chime materials along for friction sound, or utilizing bars as mallets to chimes. Might attach chains of chime ornaments to hang from hip for easier access to striking surfaces. Vary left and right sides for different sonorities on ascent and descent. With partners in different locations, one scurries up or down, pauses still while another continues the gliss at a distance.

For above-waist railing or other hard, higher architectural features, walk in small steps sideways crabwise, to sound chimes hanging off back, back-scratchers. With repetition, reminiscent of the clinking of mugs against jail bars. Arms raised to the vertical.

Sweepers
Each perches on a different step, on either side (left or right). In synchrony with other chimes, twinkle tip-toe lengthwise to the other side. Then switch steps (up or down). ||: synchronous lengthwise crossing, switch steps :||

Sensors
Each on a different step, aligned along the same side of the staircase. Flap, shimmy or rotate upon visitor passing up or down stairs.

Up/down
Call and response with another chime or group of chimes on a different level, in aural coordination.

Vertical antiphonies
Stand in small groups on each landing. Each miniature chorus sounds a pattern. After a pause of indeterminate duration, another chorus responds. A game of telephone reveals a gradually evolving movement-sounding pattern.

Flocking
In culminating unison, all rush up to highest landing, gather in a flurry of continuous flapping, shimmying motion, rush through galleries, down as flock. Various flocking formations – V skeins, starling murmurations of instantaneous telephone games. 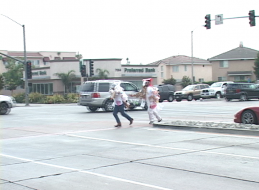 Photos from video documentation of selected prior performances: