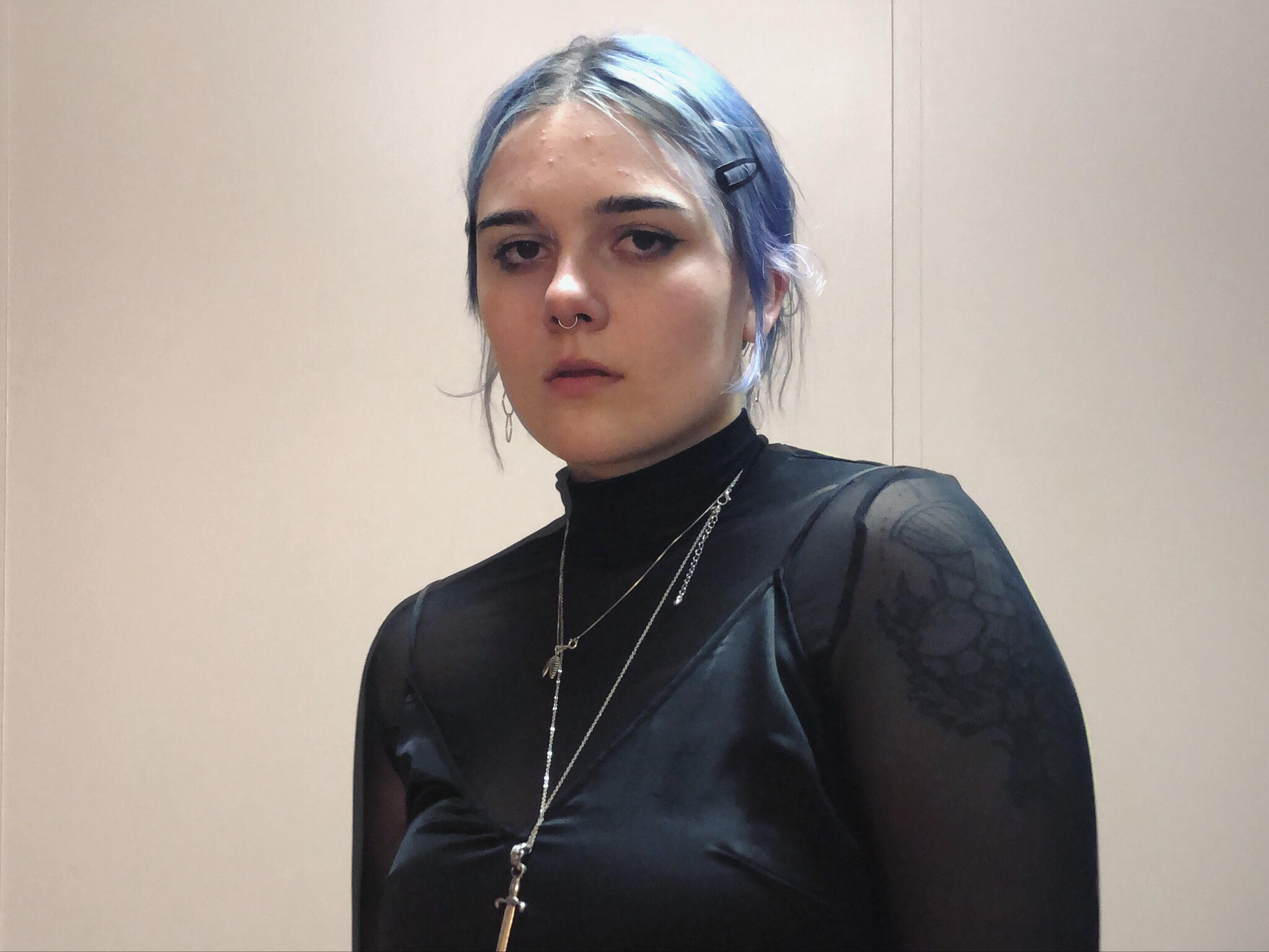 Sophie Paquette is from Bloomington, Indiana. Her work has appeared in The Rupture, Quarterly West, Black Warrior Review, Split Lip, Heavy Feather Review, and others. She is a freshman at Columbia College in New York. 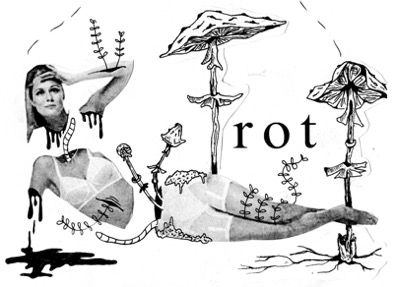 I love gross things. Gross in both senses of the word: repugnant and vast. Considering the body, I am often drawn to images of rot. When the language used to describe women’s bodies depends on the essentialist “Mother Nature” motif—the blossoming woman, fertile bearer of fruit, she who is flowering and deflowered—we place women in the garden, the harvest, ripe for consumption. I am more at home with the body decayed. Maybe because this image of the woman as fruit has expired—biologically reductive and reliant on a white, cis, thin, heterosexual and traditionally femme icon of beauty I feel no comfort idolozing. Spoiled for me, too, by decades of artists fragmenting women into bite-sized pieces, to the point that their image becomes only an after image, a decomposing memory of something once alive, breathing, and whole.

Kinship with the gross guided my essay “Rot” in its earliest draft. Flies inhabit the piece as a throughline, the essay itself swarming with vermin. Images of women are repeated, cut up, distorted. I regurgitated art I had previously taken in. I appropriated text—this, its own form of feast and expulsion. I wanted to examine consumption from all angles: material consumption and the language of advertisements; our historical desire to see women consumed yet unable to commit the act of consumption; my own history with eating and the evacuation of food; my drive to consume other art and arrange it in context with myself and the world. The essay exists as a modular and interdisciplinary regurgitation of these elements, a map toward understanding my body and its place among a multitude of bodies. 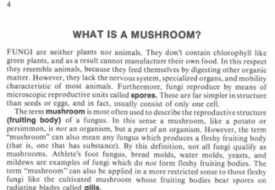 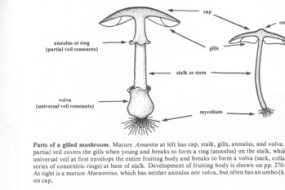 David Arora’s field guide Mushrooms Demystified, source material for the appropriated text in the essay, entered my life as a random purchase at a used book store. Immediately, I was delighted by the language inside. Augmented by Arora’s strange and lyrical style, I found the scientific nomenclature of mushrooms surprisingly human: words like “fruiting body,” “pores,” “spores,” “flesh,” “volva,” and “spawn.” Arora detailed the tastes and smells of fungi, described their bodies at great length. While I felt rejected by the image of the woman I had seen perpetuated in art and media, I was weirdly familiar with these mushrooms and flies. I understood fungus as ugly, beautiful, poisonous, delicious—as thing hunted and thing feared, as starving, ravenous, and, like flies, feasting on the rot it has been offered. This new language offered me a different angle from which to recognize my body and myself. I knew I needed to incorporate Arora’s words into a project. 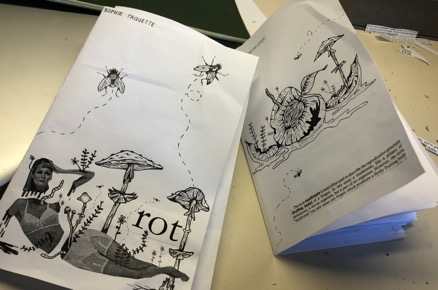 I wrote the first draft of “Rot” for a nonfiction workshop during my junior year of high school. Originally, I turned the essay in as a makeshift zine—messy photocopies stapled together, words edging into margins. The writing process was equally DIY. I cut out blocks of lyric essay and glued them onto the page. I scanned passages from Arora and collaged them in. I copied the Warner’s girdle ad (another piece of source material) and took scissors to its subject. I hand-drew the illustrations. I cut out windows in the page and taped in clear plastic, introducing a third dimension to the piece that capitalized on the layering inherent to the book as object. I pasted in sheets of mirrored paper, forcing the viewer to confront their reflection beside a passage describing my discomfort with the same act. I needed the reader to pick up my writing, to turn it and look through it, to see themselves. This was the only way the essay made sense to me. 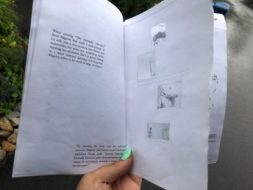 Several elements of the essay changed through revisions, and possibilities once accessible through the booklet form were sacrificed when I moved the piece onto my computer. Digitization, however, offers its own opportunities for intermedial play. This amorphous quality, a brief introduction to differential text, excited me most when working through multiple constructions of the essay. Translating my writing from one container to another—from printed page, to my computer, and printed again in Black Warrior Review—also made me reconsider how I choose future essays’ forms. 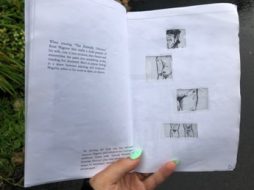 The first draft of the essay will always be important to me. Now, at 17 years old, I am grateful to have in this essay a preserved, tangible skeleton of the ideas and image I relate to my body—a reflection more accurate and expansive than that found in photos and mirrors. I am grateful that I can touch this period of my life. To understand the way I saw other women’s bodies mangled in art and media, I had to cut things with my hands, to turn the pages, to move text manually and collage images, words, and illustrations together without the cold sense-making of a computer screen. The process was inextricable from the product. 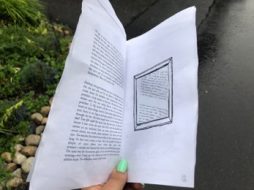 Whether it is the essay’s shape, its presentation, the labor of crafting it, or the element of research, I want my hands, body, and mind to be involved in my projects in a way that is usually more physical than typing alone. Since I am interested in the body and appearance, it is important to me that my work carries the same structural urgency and mimetic attention to shape. 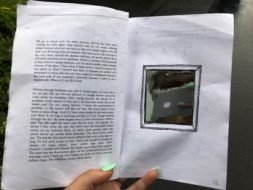 I distrust pretty things and that includes my work. Because I am gross, I want my writing to be gross: to provide comfort through the uncomfortable, to look ugly if it is, to borrow, to squirm, to smell, to lavish in disgusting detail, and finally, to take up too much space.

To read Sophie Paqeutte’s “Rot” and more from 45.2, purchase a copy here.