Translated from the Spanish by Robin Myers

A reading of the English by the translator

A reading of the Spanish by the author

The Extermination showed up a few weeks before the machines came to Zanjón de la Aguada and drained the swamp (rank, fetid, black). That’s what I called him because he didn’t scare me like he scared everyone else, and he seemed to like it, or else he just liked that I was nice to him (get away from that filthy thing, you hear me?). I also wasn’t scared when I stood at a distance and watched him swallow a frog and then a lizard into the lower half of his body. It actually made me laugh, because that’s when I realized the Extermination trailed a little neon path wherever he went, like snails (come on, come look). Which he also ate. He stepped right over them and then they were gone, except for two bright little trails that crisscrossed over each other and a bigger one that kept moving (vrooom). I liked him right away, because I know what it’s like to be low-down and not have any friends. Besides, when the Extermination showed up, Remigio was hitting me and everyone else just watched and didn’t do anything. The Extermination scared them (every last one, one by one, I told her. And she said: so what did he do to the other kids? ’Cause I sure as hell don’t want to fight with the neighbors) and no big kid ever hit me again and I never left the Extermination’s side (get over here, you fuckin’ brat). We didn’t do much that first day. I went up to him and offered him part of a buttered roll my mom had wrapped up for me in a napkin (I’ll be home at seven). I took it out of my pocket and the napkin had come off and the butter was smeared all over the place. The Extermination didn’t care. He ate it anyway (who knows what kind of shady shit that kid’s gotten into). I stuck it into the little hole that opened up in front of me at head level. I figured it was his mouth because there was a bad smell coming out of it, because he always forgot to brush his teeth (and what about that stench?). Then we sat together on a rock overlooking the river. When night fell, the Extermination gestured to me and disappeared, dragging himself off toward the water (come on, bring your ironing, the telenovela’s about to start). The next day, I went looking for him and saw him coming out of the swamp as if it were a cradle. He rose up like a crocodile: first his eyes, then his scaly body, then those gushes of color that seemed to be his clothes (he’s hanging out with that crook. He better not go in there or I’ll drag him out by his hair). Then I told him I wasn’t allowed to swim in the river. He gave me something wrapped up in the same stuff his clothes were made of (nothing but garbage, you know). I went and held it under the faucet. The water started to reveal an orange. We ate it in the middle of the day, when the heat was worst. It tasted good. Remigio showed up at eleven-thirty sharp with Gaby (trashy, stupid, gross) and they started pelting us with green peaches. One smashed me right in the face and I couldn’t really see what happened next. But people said later that it was like they’d sprinkled him with water, it slid right off him, and Gaby and Remigio were scared, because the Extermination had sort of stretched himself out long somehow and he looked huge, like he’d hit a growth spurt. (And then he stepped over them and ate them up, just like he’d eaten the snails and the frogs and the lizards. I saw him do it with my own two eyes.)

Then things got weird. People started yelling stuff at us on the street. And since the Extermination started eating other people, the ones who talked, the ones I told him were saying mean things about me and him, they got even more scared (hello, Police, hello, City Hall, hello, Health Services). Meanwhile, the Extermination started to grow, and he grew until he was as big as a house. And people started blaming him for everything (looks like the Extermination nabbed the Gallego, Maribel’s husband. I mean, he loved her too much to just walk out, don’t you think?). And people started showing up with cameras and they filmed me with the Extermination, and the talking lady covered her nose and mouth with a handkerchief (in this filthy, foul-smelling place, the stench is overpowering. Living conditions are deplorable. Children are dirty and abandoned). Then she threw up, but they left that part out. So I invited the Extermination over to my house so we could watch the nine o’clock news, but my mom wouldn’t let him in (get out of here, you revolting thing, don’t you dare set foot in my house) and I left with him, because he’s my best friend and he eats people to defend me and nobody else ever bothered me or hit me or said anything mean to me again. Then the machines came (toot, toot, toot, vsst, vsst, vsst, vsst) and it was awful, because the Extermination didn’t have a place to live or take a bath anymore. We sat on the rock to watch the machines pulling up the mud that had replaced the mucky water that had once been the Extermination’s home and they found plastic bottles, little bags of chicken bones, orange peels, cans, clothes, cardboard, a man’s skeleton, the top part of a car, some tires, a shovel, some photos, a notebook, a backpack, a piece of plastic from who knows what, cooking pots, an unbroken glass cup and another one made of plastic, a triangular glass, rotten flowers, plates of food, computers, cables, a lamppost, a stuffed panda bear, a petrified tree, an entire armored car, a house, an enormous hole that hurtled forward and shot all the way into the center of the Earth, a pencil, and a pencil sharpener. At least that’s what I could see from where we sat. And it rose up like a crazy wind, the steamy haze that had hung around us every day of our lives (finally someone is doing something and let’s hope all that garbage goes away, people here don’t have anything to eat, kids don’t have anywhere to play).

As the days passed and the swamp turned into a construction pit, the Extermination started shrinking and shrinking, until one morning he fit right in the palm of my hand. That’s when I thought about giving him a present so he wouldn’t feel bad or think people didn’t like him. So I got out the blender and stuck in a wooden board, a trash bag, a Coke bottle, some canola oil, a bat, toothpaste, an old engine from a toy car, a little bit of benzene, my mom’s hand, and some milk, and I blended it all up. I placed the Extermination on the kitchen floor and poured the mixture onto him. He suddenly started to grow, to feel like himself again. It didn’t last long, though. So I had to keep making lots of energy juices like that one, but I was running out of stuff. I didn’t have sheets on my bed anymore or underpants or neighbors to help out when they needed it. And I tried to explain it to him with a heavy heart. But I couldn’t, because a man showed up in a baseball cap with a logo on it (Why don’t you do us all a favor and calm the hell down, young man. You watch yourself now) and blasted us with water from an enormous hose without waiting for an answer. I was soaked. My pants fell down, because I’d given my belt to the Extermination. As I tried to haul them up again so that the new neighbors wouldn’t make fun of me, I saw how the Extermination was getting smaller and smaller until his tiny body disappeared, his mole body, his newborn-kitten body, his fly body, and his whole self completely dissolved into the water.

Mónica Ramón Ríos is a writer, editor, and scholar originally from Chile. Her books of fiction are Cars on Fire (2020), Alias el Rucio (2015/2014), and Segundos (2010). She has also published the essays “Cine de mujeres en Postdictadura” (2010) and “La escritura del presente: el guión cinematográfico (Manuel Puig y Ricardo Piglia)” (2009). She edited the volume Literaturas y feminismo (2018). As a film, literary, and cultural critic, she contributes regularly to publications in Mexico, Chile, and the US, and her academic work focuses on the intersections of Latin American film and literature. In 2008, Ríos co-created the collective Sangría Editora, which publishes fictions, essays, scripts, plays, and agit prop. 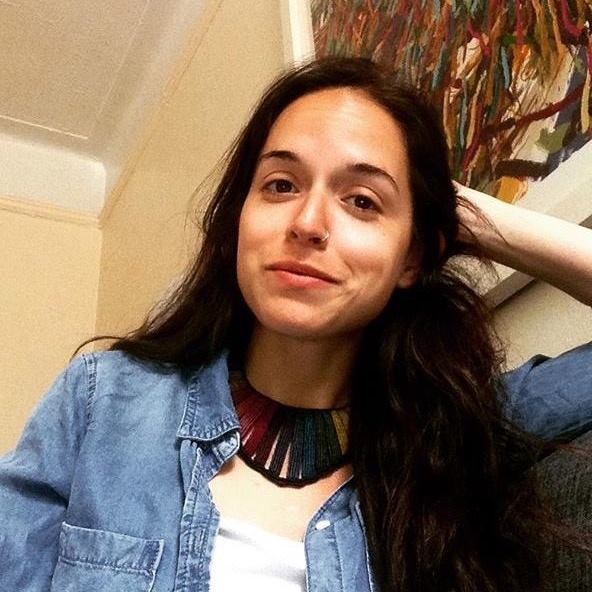 Robin Myers is a Mexico City-based poet and translator. She was among the winners of the 2019 Poems in Translation Contest, organized by Words Without Borders and the Academy of American Poets. Recent or forthcoming book-length translations include The Restless Dead by Cristina Rivera Garza (Vanderbilt University Press, Fall 2020), Cars on Fire by Mónica Ramón Ríos (Open Letter Books, 2020), Animals at the End of the World by Gloria Susana Esquivel (University of Texas Press), and Lyric Poetry Is Dead by Ezequiel Zaidenwerg (Cardboard House Press, 2018).

For more from BWR 46.2, pick up a copy today from our online store.