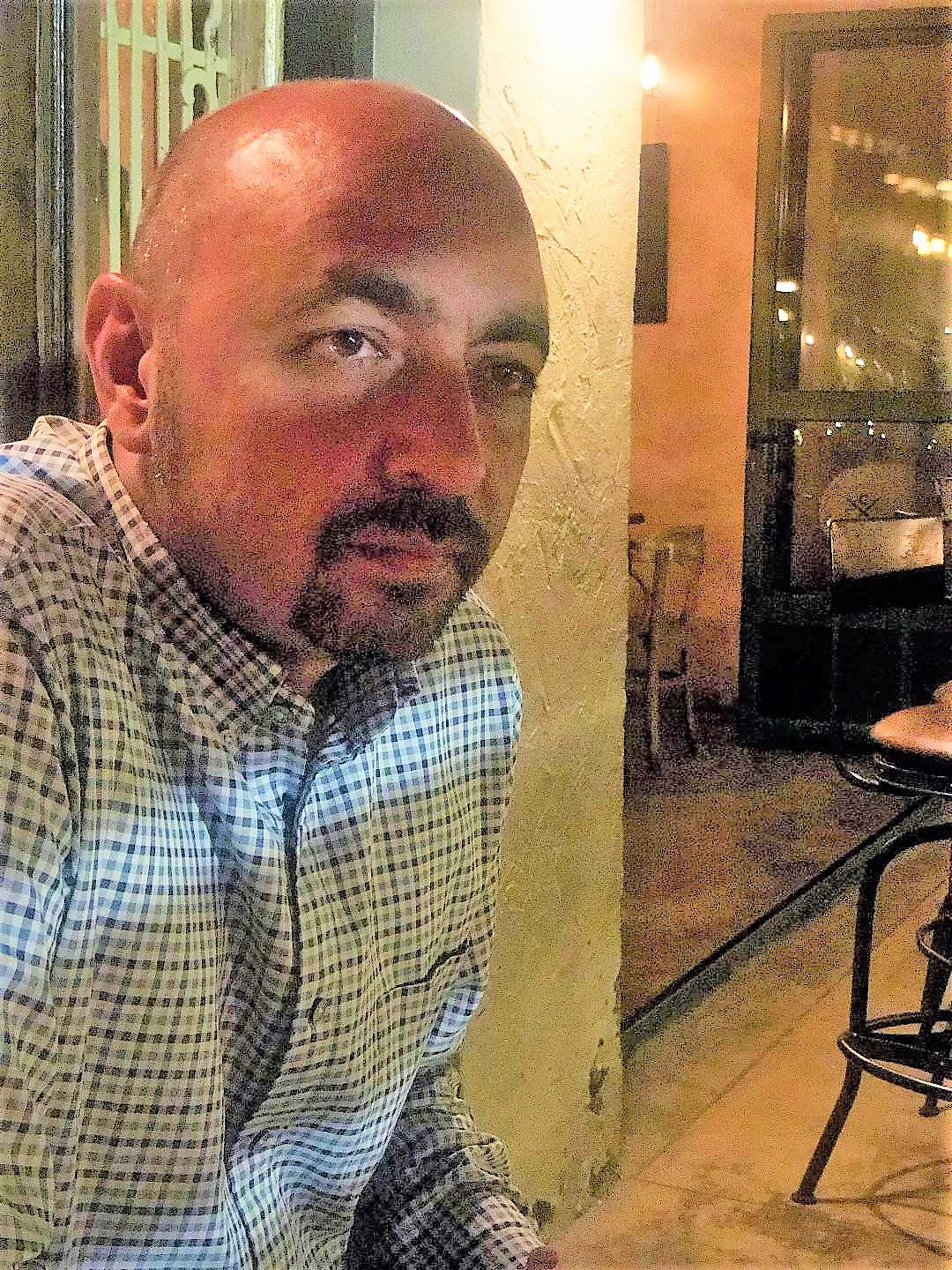 Hisham Bustani is an award-winning Jordanian author of five collections of short fiction and poetry. He is acclaimed for his bold style and unique narrative voice, and often experiments with the boundaries of short fiction and prose poetry. Much of his work revolves around issues related to social and political change, particularly the dystopian experience of post-colonial modernity in the Arab world. His work has been described as “bringing a new wave of surrealism to [Arabic] literary culture, which missed the surrealist revolution of the last century,” and it has been said that he “belongs to an angry new Arab generation. Indeed, he is at the forefront of this generation—combining an unbounded modernist literary sensibility with a vision for total change…. His anger extends to encompass everything, including literary conventions.” Hisham’s fiction and poetry have been translated into many languages, with English-language translations appearing in prestigious journals across the United States, United Kingdom, and Canada, including The Kenyon Review, Black Warrior Review, The Poetry Review, Modern Poetry in Translation, World Literature Today, and The Los Angeles Review of Books Quarterly. His fiction has been collected in The Best Asian Short Stories, The Radiance of the Short Story: Fiction From Around the Globe, Influence and Confluence – East and West: A Global Anthology on the Short Story, among other anthologies. In 2013, the U.K.-based cultural webzine The Culture Trip listed him as one of Jordan’s top six contemporary writers. His book The Perception of Meaning (Syracuse University Press, 2015) won the University of Arkansas Arabic Translation Award. Hisham is the Arabic fiction editor of the Amherst College-based literary review The Common, and the recipient of the Rockefeller Foundation’s Bellagio Fellowship for Artists and Writers for 2017.

Re-writing al-Hallaj, or: Rebelling in Form and Subject

I have always been fascinated by the rebels of Islam.

As a child, religion was always presented to me as a rigid and static doctrine, a single unidirectional passage toward deferred salvation, a “straight path” toward justice that will never come to pass on Earth but only after we cease to exist. We were taught that Islam represents one “truth” and—like God—has no second. So imagine, if you will, the shock of discovering the voices of these rebels in classic works on the history of Islam.

These characters were the antithesis of dogma. They represented a potential for freedom, dynamism and aspiration for change. They were part of the official canon: often mentioned, sometimes recognized for their importance, and in a few cases even celebrated. But they never found their way into the mainstream, into formal education, into the conventional narrative. They were odd shooting branches that had to be pruned to maintain the “pure” form of Islam— the singular, authoritarian pure form.

Like stones thrown at the still surface of a lake, these misfits declared themselves. Abu Dharr al-Ghifari spoke against the corruption of the Umayyad ruling elite in seventh-century Medina and Damascus and, as a result, was exiled to a remote village where he died with a cloth too short to serve as his shroud. al-Ja’d bin Dirham, whose heterodox interpretation of Islam led the Wali to announce his death sentence from atop the minbar during Eid al-Adha (feast of sacrifice) prayers: “People, go and present your sacrifices, may God accept them, for I shall be sacrificing al-Ja’d bin Dirham.”

If one looks, there is no shortage of renegades. Ibn al-Rawandi was the most famous atheist of Islam and thrived (unharmed) during the “Golden Era” of Abbasid rule. His books are now lost, yet we know some of his writings through the fragments quoted by his adversaries. Wallada bint al-Mustakfi, the poet daughter of the Caliph of Cordoba walked around unveiled in transparent clothing with verses of her poems embroidered on the trim of her tunics. Ibn al-Muqaffa’, the translator of the infamous Kalila wa Dimna fables, died a horrendous death, cut into pieces and fed into a fire.

The lives of these characters challenged the narrative of Islamic history that we were taught: a homogenous, essentialist, monotonous, opaque, rigid fundamentalism that replaced the vivid, complex, historical, diverse, expressive human history. A tradition that manifested itself in various forms and interpretations like any other sociopolitical process. These characters also illuminated the deep entanglement of religion and authority and how the latter dominates the former. Through these characters, Islam revealed itself to me as a historical phenomenon, a laboratory of struggles and potential.

In addition to the breath of fresh air that these characters provided me as I negotiated and built my own intellectual space, their life histories were deeply intertwined with the subjects and forms of the literary writing I wanted to produce: critical, scathing, engaging, multilayered, and condensed. Generating questions rather than providing answers. I wanted to write the world as defined by quantum physics: one of many potentialities and possibilities, one that branches into a spectrum of realities. These characters represented multivergence and diversity, and many represented a marriage of social-political confrontation and literary writing. For me, they were the alternative turath, Islam’s religious heritage, and I mobilized this turath as a powerful vector for literary experimentation on contemporary subjects and forms.

Abu Dharr, for example, made his first appearance in my literary writing in my debut short story collection (yet to be translated into English) Of Love and Death (2008). He appeared in passing to propel the narrator’s rebellious, dreamy monologue about a resurrection from amidst the ruins. His second appearance had more value: he appeared as a transformation in subject and form in my prose poetry/flash fiction book The Perception of Meaning (Syracuse University Press, 2015, translated by Thoraya El-Rayyes). In a reflection on his famous quote, “I am astounded by the starving man, how he fails to come out against the people brandishing his sword,” I wrote what reinstated the fearless Abu Dharr as a provocateur par excellence, reformulating his astonishment into action in a reversed-justice scenario, a scenario where literature can be deployed for reflection and contemplation, utilizing turath’s style of telling / informing / reporting a story to transform a contemporary violent reality (poverty) into poetic justice (absolute equality).

Enter al-Hallaj. Like many of Islam’s Sufi leaders, al-Hussein bin Mansour al-Hallaj was more than a mystic who claimed to be an incarnation of God, thus suffering the wrath of a fundamentalist, populist, authoritarian understanding of The True Faith. Rather, he was one of those rebels who expressed their political opposition and radical opinions through the vocabulary of Islamic religious texts. Islamic conceptions were (and in many ways, still are) a language of everyday life, a metaphor to speak about, and represent, the entire world with all its contradictions, a venue where both authority and its opposition find their legitimacy, explanations, and fighting tools. No wonder Islam speaks so many tongues, and represents so many (sometimes paradoxical) attitudes.

Reading al-Hallaj’s tragedy, the stories that tellers relayed about him, his poetry and prose, I was deeply submerged in him, unified with his suffering, and absorbed in his enduring writing. There was a sense of urgency and contemporality about him that called out to me (like it spoke to many other writers before me) to resurrect him again. Where I parted with others was in resurrecting him in an ambiguous ancient-modern time, something similar to the circumstances in which we live here in the Arab world, a suspended existence between past and present.

But this suspended existence is also global. In my story, al-Hallaj asks about the whereabouts of his egalitarian peers, but what he finds is what we know already, what we experience daily as a corrupt, cyclic reality:

In the alleyways, he saw a policeman slap a beggar, and the beggar steal something out of a woman’s purse, and the woman secretly rifle through the wallet of her husband the porter, and the porter throw himself obsequiously at the feet of the Vizier, and the Vizier adjust the temperature of the jacuzzi for the Caliph, and the Caliph take orders in a strange language through the receiver of a red telephone with no buttons, then splash some bubbling warm water on the naked body of the policeman’s wife, and the policeman slap a beggar.

For me, it is important that al-Hallaj bears witness to this ongoing catastrophe that no one seems to be interested in stopping and recreates itself in contemporary people like Greta Thunberg as she lambasts world leaders for ignoring global warming, yet somehow, deep down in her gut, she knows that she (and her generation) will end up on the cross of capitalism’s drive for profit and more consumption. Yet she goes on anyway, utilizing a modern form to retell an old story.

This was why I was so immersed in al-Hallaj and his language, an immersion that became so extreme that I spent a month trying to find the reference that quoted his words on the cross, and which appeared in my story. After exhausting myself in research, I finally discovered that the sentence was my own invention. What more could I ask for in my quest where literature is a process to explore the many layers of an event, and generate “truths” from the singular authority of an “agreed upon” narrative?

To read Hisham Bustani’s “The Many Tortures of al-Hallaj,” translated by Thoraya El-Rayyes, and more, purchase a copy of issue 46.2 here.