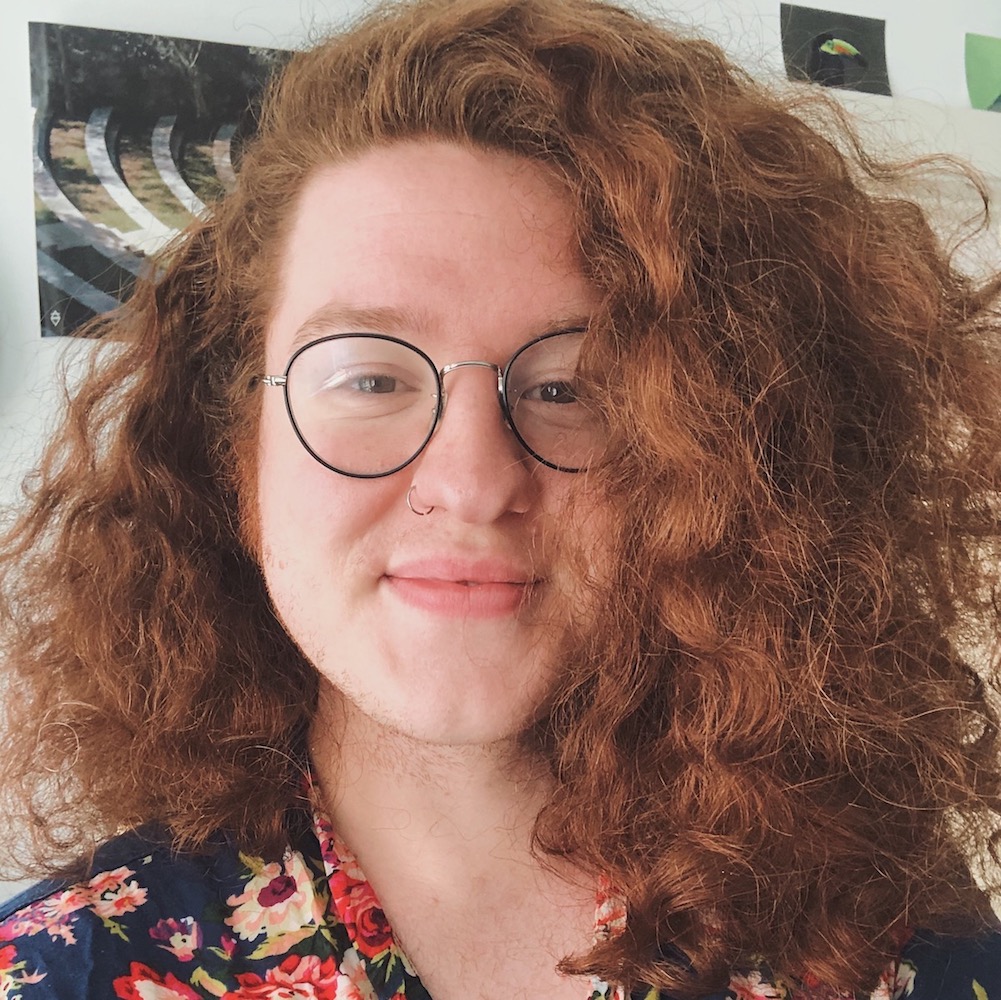 Dennison Ty Schultz is a queer poet and MFA student at the University of Missouri–Kansas City. Their poems have appeared or are forthcoming in Impossible Archetype, Foglifter, Peach Mag, New Delta Review, Fugue, Glass: A Journal of Poetry, and Tinderbox and have been nominated for the Pushcart Prize and Best of the Net. They tweet @clubdenni.

Imagine we’re in an art museum. We’re standing in front of Marcel Duchamp’s Nude Descending a Staircase, No. 2. I have my head tilted to the side and one foot toe-tapping behind me. I look like a lazy flamingo. Imagine, around us, chaos—it’s February 17, 1913, New York, the Armory Show. The Cubists have rejected this painting, saying a nude only reclines, so this couldn’t be a nude. American Art News is writing a review offering ten dollars to the first reader able to “find the lady.” After all, how could a monochrome eruption of geometric fragments represent anything at all, let alone a body, let alone a woman? Or, chaos—it’s April 8, 2018, Kansas City, the last day of a Picasso exhibit, the rooms full, the crowd corralled into a single line. We’re in front of a painting of a woman in a red armchair, blocky triangular head, teeth exposed. Imagine this is all one moment. We’re in an art museum. Someone behind us says, “I don’t understand how anyone can see like this.”

When writing, I often think about the myth of Diana and Actaeon. When the goddess sees Actaeon watching her bathe, she turns him into a deer, and he is killed by his hunting hounds. A house in Pompeii has a mural of this myth around a door. Asking house guests to walk through the door also asks them to step into the gaze of Diana first seeing Actaeon—into danger. How does this mural, this stepping through, change both myth and mortal? If I poem through a doorway filmy with cubism, how do I change cubism? And how does cubism change me?

I’ll admit, at first I was worried. After moving alone to a new city, away from almost everyone and everything I knew, disoriented, I had unprecedented aloneness with myself. Avoidance, repression, shame: the usual suspects—survival mechanisms—mediate my relationship to my body. Here, they gathered, ringing around me in all their loudness. Sure, once, they protected me, but now they do more harm. In front of me, the page changed. I love form and all its possibility; generally, I see the form of a poem the moment I have the poem’s inciting language. But now there was a strange block—no language could be visualized, no visual carried language—until the margins became demagnetized. Then language pushed against the page like a face smooshed on glass, the page traversed by fragments, the page rampant with motion, the body and self stripped bare, in ways I connected to cubism and, especially, Duchamp.

Cubism, according to its primary theorists Albert Gleizes, Jean Metzinger, and Guillaume Apollinaire, is a mode of realist observation. Resisting imitation of reality, the style recognizes how depth translates into differences of color, how anything from mental states to motion to perspective impacts representation on a canvas, a simultaneity that complicates the picture plane. Of course, what people see are fragments, shards, but with careful attention, fragment and rupture can mean possibility. According to the black hole information paradox, for instance, if someone observes you plummeting toward a black hole’s event horizon, they would see you reduced to ash, while you would feel yourself continue falling—both realities simultaneously true, depending on whose perspective you take.

Burgeoning theories of relativity influenced the Cubists and their paintings a great deal, perhaps especially Duchamp, obsessed with the energy of motion. I first saw the Nude in high school, when my sister told me it would make a cool tattoo sleeve. Its visual language stuck with me, how Duchamp depicted multiple perspectives and multiple temporalities on a single still canvas in a style that could only be accomplished outside of normativity. I felt like something I didn’t know I needed had been made possible. Now I know something of Duchamp, how he resisted sticking to a single style, refusing fixity. Jerrold Seigel argues that Duchamp’s cubist paintings made nudes the carriers of fluidity, resisting stable forms, and doing so hints toward Duchamp’s later feminine persona, Rrose Sélavy. This resistance became important to Duchamp’s next work, the glass painting The Bride Stripped Bare by Her Bachelors, Even. The piece, comprised of a top panel of painted glass featuring the bride and a bottom panel featuring several bachelors, is accompanied by extensive notes, where Duchamp explains that the position of the bride is defined by a desire disconnected from a specific object, is “fulfilled in its present state of desiring,” the bachelors irrelevant to her desire and blocked from her panel. Here, relativity returns: the piece—the bride specifically—reaches for an unexperienceable fourth dimension, both in medium, the three-dimensionality of paint made thin in the glass, and in perspective, which Duchamp describes as “a finite 3-dim’l continuum rotating…about a 2 dim’l hinge.” Yes, this is confusing—it’s meant to be—but imagine both perspectives of the black hole, where two realities, one of death and one of continuous falling, must be held simultaneously as true. Or the canvas, bearing motion in a still medium. By disorienting the viewer, Duchamp makes us reach toward a world unbound by the limitations of real life.[i]

How easily this reaching toward the unreachable brushes into queer theory. José Esteban Muñoz says:

Queerness is not yet here.… We may never touch queerness, but we can feel it as the warm illumination of a horizon imbued with potentiality.… Queerness is a structuring and educated mode of desiring that allows us to see and feel beyond the quagmire of the present. The here and now is a prison house. We must strive, in the face of the here and now’s totalizing rendering of reality, to think and feel a then and there. Some will say that all we have are the pleasures of this moment, but we must never settle for that minimal transport; we must dream and enact new and better pleasures, other ways of being in the world, and ultimately new worlds.… Queerness is a thing that lets us feel that this world is not enough, that indeed something is missing.[ii]

Like the bride, queerness is marked by suspension in an ever-reaching desire toward a better world. I think, also, of Judith Halberstam, who marks the compressions and disruptions of time generated by queerness’s operating outside of normative temporal structures.[iii] Can I participate in genuine self-portraiture without marking how time riddles the body, reckoning with how I approach memory and imaginary, how I resist being present and fail? In drafting “Passing Narrative,” reckoning with how passing as straight or as cis is simultaneously a period of fraught motion and uneasy stagnation, I was baffled by how the poem collapsed memory, imaginary, and present feeling onto one another, as though I were watching myself process. I saw myself walking down a set of stairs, and I saw myself ahead descending another set of stairs, and I saw my reflection in the window sitting at a table in a very busy coffee shop trying to write a poem, all this while a bus driver glared me off a bus, right as I imagined the bus gunning up to shake me to the pavement, right as I remembered the man sitting beside me on an airplane who pivoted to take a picture of my legs to send to his friends. Often the worlds of my fear leave me dead; often, I struggle to imagine and enact a life out of the grip of that fear. But here I am walking down the stairs.

And here I am writing sestinas. I love sestinas, pantoums, forms that repeat; it’s how I imagine possibility. When a poem loops back to its repetitions, it reveals the multidirectional adventure of a word, touching and finding an elsewhere to go, the tangent lines of a circle. But, it also recalls its past, implies its extension into the future, begs you to stay with it here, now, just a little longer, all at once. The key strategy to the literary cubist movement, exemplified by Gertrude Stein, was repetition, the linguistic counterpart to visual geometries that formed essential characteristics of the human form and which, following Marjorie Perloff’s analysis of Tender Buttons, makes a geometry of the way language constructs meanings.[iv]

To the Cubists, geometrifying their subjects emerged as a cognitive process, but self-portraiture makes it difficult to ignore the emotional, especially for someone whose emotions are so intense, quick-footed, and clamorous—good tap dancers. This emotional geometry of internal landscape, compounded with geometries of body and meaning, became repetitions in the poems: by the time I had a handful of words for “(Dead)Bird,” I knew it would be a sestina, though I wasn’t sure of the end words—possibly bird-related words, possibly words with “body” as their root. Going back to this draft, I found a note I scribbled to the side: “if you could build your body, what would you want in it?” The answer rested in the existing language, where (dead)birds already made several appearances, making the poem take on a version of the sestina after Diane Seuss’ “Young Hare.” Each line, with its metronymic bird, marked the most minute, the most significant emotional shift. Birds became the way to recognize the patterns, to bear witness to myself when I most wanted to cleave my self from my body, to see myself for what I felt, while also giving me the visual language to imagine the hinge that could draw me out of my grief for those unknown things you can’t quite remember whose loss you feel enormously, for a body I tried so hard to lose, I thought so surely I had lost.

The biggest difference between my poems and me is that my poems know how much space they take up. This is not an apolitical physical positioning of the body: it’s both a failure of the queer imagination and an upholder of the mythology of invisible whiteness. The poems, however, can undergo adjustments but tend to maintain their spatial knowledge. “(Dead)Bird” had to murmur across the page, insisting on its horizons. “Passing Narrative,” even after a desperate editing-down of language, still ended up back to the exact length it was before. These poems become sites to hold complication, teaching me to oscillate back to physical reality and reckon with an essential unfixity—how I move and hold movement, how I’m positioned in the now, emotionally, physically, politically. They critique and imagine snapshots of ever-moving language to (re)cast my body into new queer worlds. I think I ask a lot of my readers, to understand something of me. I think poems are a sneaky way I convince myself to do the same.

[i] For more on Seigel’s analysis, sources for Duchamp’s quotes, and Duchamp’s ideas about fluidity, desire, and the fourth dimension, see Jerrold Seigel, “Desire, Delay, and the Fourth Dimension: The Large Glass” in The Private Worlds of Marcel Duchamp: Desire, Liberation, and the Self in Modern Culture (Berkeley: University of California Press, 1995), 86–114.