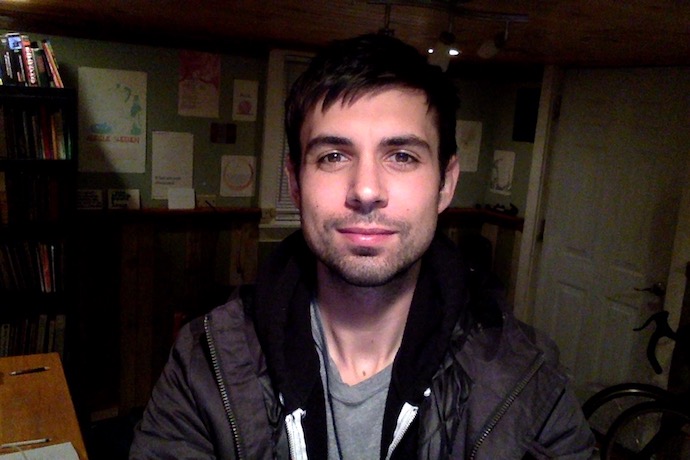 Jake Syersak received his MFA from the University of Arizona and a PhD in English and Creative Writing from the University of Georgia. He is the author of the full-length Yield Architecture (Burnside Review Books, 2018) and several chapbooks. His poems have appeared in Colorado Review, Notre Dame Review, Verse Daily, Omniverse, Volt, and elsewhere. He edits Cloud Rodeo and its chapbook imprint, Radioactive Cloud. He is currently translating the works of Mohammed Khaïr-Eddine and Hawad.

I don’t endorse the idea that any text is “untranslatable.” But if there is such a thing, it’s probably an essay on translation. Mind you, it’s not my intention to deride or denigrate an entire discipline. I think that the production of literary work in translation is one of the most subversive and politically conscious acts one could take up in the modern world. It’s only that too often translation theory is brimming over with extravagant existential digressions or defeatisms (“woe is me, no text in translation can ever reflect the original”)  or opaque linguistic or technical jargon (“this+that+a dash of thisthat=relative equivalence”) that, rather than serve the ubiquity of texts in translation, serve only to intimidate would-be translators by convincing them, from the start, that one need to an expert philosopher, semanticist, linguist, whatever—maybe all of the above and more—in order to translate. Nothing could be further from the truth. You need two essential things: a dictionary and an intuitive passion for the source and target language text. The rest is luxury.

Whereas too much translation theory tends to speak about everything and anything but its main task (how to translate), the most helpful, canonical texts about translation (those by, say, Schleiermacher, Benjamin, Venuti, Bassnet, or Spivak, to name only a few)  have the following thing in common: they always treat the act of translation as a force that lives inside and outside of the page. And indeed it does. Let me be perfectly straightforward—I’m not reinventing wheels by repeating this. All I’m trying to do is condense—to translate—tens of thousands of pages of translation theory into a single dictum, what I think is the most important answer to the question, “how does one translate?” Here goes:

If you know why you’re translating a text, you’ll know how to translate that text.

Umberto Eco, in his Mouse or Rat?: Translation as Negotiation, gets it half-right when he says that “the aim of a translation, more than producing any literal ‘equivalence,’ is to create the same effect in the mind of the reader (obviously according to the translator’s interpretation) as the original text wanted to create.” Eco is right to assume that there is always some general effect, some gesture in the text the translator is trying to revive in the contemporary moment. But no effect, as he himself implies, can operate in the same way throughout contextual space and time. That’s why I call it a force, rather than simply an effect. Indeed, whatever you are trying to translate from the source language to the target language is an interpretive effect you, as reader, are having, but once you begin translating that effect, from page to page, from the target language to the source language, it becomes a decisive force that you, as a translator, are exerting upon others and the world at large.

An example I love: In Mary Jo Bang’s translation of Dante’s Inferno, she renders the personage of Ciacco, the glutton from classic Italian literary history, as South Park’s Eric Cartman, the glutton from pop-culture American television. In a text originally full of contemporary allusions and thinly-veiled social and political dog-whistles, Mary Jo Bang exerts force on the world through her translations by resurrecting the power of its allusions, thus resurrecting Dante’s Inferno through the American entertainment-industrial complex. The force she chooses to translate lives as forcefully on the page as it does off the page.[1]

My decision to begin translating the works of Mohammed Khaïr-Eddine didn’t start on the page. Having long loved the work of Francophone Surrealist poetry, I of course fell in love instantly with his work. But instead of choosing any other number of Surrealist texts yet unavailable in good English versions, I chose his. I chose his because it was the early fall of 2016 and it was looking increasingly likely that Trump was going to be the next president. And behind him was an impending wave of nationalist, racist, imperialist, xenophobic, fascist and anti-Arabic language.

Mohammed Khaïr-Eddine’s work is the antithesis of all those things, and that’s a force I wanted and needed—and still very much want and need—in the world. A quick crash course in Khaïr-Eddine, for those who don’t know: Khaïr-Eddine was a francophone Moroccan writer of Amazigh (Arab-Berber) heritage who, alongside Abdelaatif Laâbi and Mostafa Nissabouri, helped to foster the revolutionary literary avant-garde of the colonized Maghreb territories of North Africa. Inspired by the revolutionary potential of Surrealism—particularly the sort manifested in Négritude poetry—Khaïr-Eddine, like others within his artistic circle, directed his linguistic prowess in the colonizer’s language against the colonizers and post-colonizing regimes. Adopting a literary and theoretical stance similar to Aimé Césaire’s, Khaïr-Eddine chose, in his poetry, to wrestle the colonizer’s tongue, transform it into a mouthpiece for the plight of those colonized and subjected to political repression, and to infuse it with the foreignness of the Other.

Khaïr-Eddine’s poetic work is work of inextricable tension, like someone keeping sweaty watch over an impressively-wrought yet nevertheless nervously-placed homemade explosive. There is a volatile and tensile nervous system embedded deep in every last one of his poems, both by way of form and its content. Each poem is a body where words fill the bloodstream with venom and nerves burn through the circulatory system like napalm, and the seams of the poetic body are always on the verge of exploding—but somehow they don’t. They keep a composed, albeit jagged and scaly elegance—something like the most beautiful of snakes filled with the deadliest of venom. All these impressions of restrained tension culminate in the force I feel foreground his poetry, and this is the force I want from poetry in the contemporary moment, and so this is the force with which I try to compose my translations.

I think—I hope—Khaïr-Eddine would agree with my prioritization. In his 1970 poetic tour de force, I, Caustic [ Moi, l’aigre ], Khaïr-Eddine describes his coming to terms with the angst, rage, sound and hydra-headed fury intrinsic to his poetry—the beauty and revolutionary potential of wrestling with formative and deformative fervor:

One day…I wrote with such speed that my own hand, having hold of the pen, was incapable of keeping up with me….I couldn’t seem to put my mind towards anything of use, much less myself. Perhaps that’s where true creation begins. I had left crybaby sentimentalism behind me, along with petty reminiscences of all sorts….I listened only to the jerky rhythm of things. A creaky door could inspire me all the same as a man emerging from a particularly dangerous venturing out. But I loved only the noise of Hurricane. It seemed to me that each of its waverings deformed the word over the course of its impression as if it were the result of igneous fusion. I no longer had anything to say. I listened….a cacophony of bullets followed by a rise of stifled howls. It was by way of this text I understood that I would have to commit myself once and for all to the path of the guerrilla linguistic.

Khaïr-Eddine’s guerrilla linguistic is tantamount to what his contemporary and fellow poet Abdellatif Laâbi would designate in his short essay “Contemporary Maghrebi Literature and Francophonie” as a style of writing designed to inspire terror in the oppressor, “i.e. a literature that on all levels (syntactic, phonetic, morphological, graphical, symbolic, etc.) shatters the original logic” of the colonizer’s language.

Of course, translating this type of text has its challenges, as the disruption of the language often occurs through idiosyncratic puns or double entendres in the source language, forcing one to make difficult and improvised choices along the way. But this is all ultimately to walk side-by-side, in solidarity, with the guerrilla linguist. Choosing one path over another here doesn’t impede anything. Even if I take the “wrong path”—whatever that may mean—I’m likely to generate some interest amongst other translators (if the work is at the very least passionately performed) and rally more comrades-in-arms. And along with them will come new and improved strategies, new and improved weaponry, etc.—in other words, all new paths. And that’s why, indeed, above all, one must trust the force of the guerrilla linguistic, its brute force and impassioned strategic fervor, because the guerrilla linguistic, deployed from a site of impassioned fervor—from any site of impassioned fervor—is in the end its own type of universal language.

[1] Although a full discussion of the matter is not possible here, I want to be clear that I am not recommending this precise strategy for non-Western source language texts. I am merely invoking it as an example of the radical possibilities of textual manipulation in translation. One should, of course, take great care to scrutinize power dynamics between languages, so as not to promote a spirit of colonialism or inflict cultural damage. Translation, indeed, has the capability to exist as both a positive and negative force in the world.

To read Jake’s translation and more from 45.2, purchase a copy here.